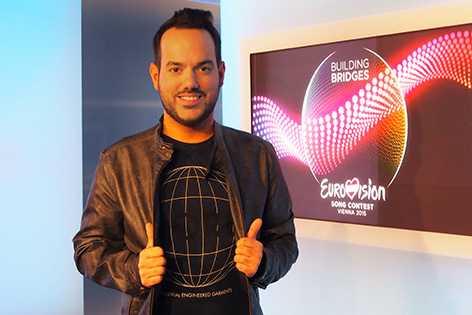 The “season of anticipation” is already in full swing! Exactly 18 weeks before the big finale of the Eurovision Song Contest, the Austrian broadcaster’s regional programme ORF Wien will launch Vienna Calling – a news show – as part of the weekly magazine “Wien heute”. The first edition of the entertainment show will commence on 17th of January at 7 p.m. Vienna Calling will be broadcast from an outstation in the Wiener Stadthalle by moderator Patrick Budgen.

The approximately five-minute-long programme will cover exciting stories about the upcoming Eurovision Song Contest, including latest reports on the event,  a so-called “Eurostar’s Country Overview” and a countdown of the most successful Austrian Eurovision participants.

In the first edition of Vienna Calling, the spotlight will be put on Arabella Kiesbauer – one of this year’s ESC moderators – during her shooting for press photos. How nervous will a television professional be when moderating a show in front of an audience of 180 million or how does one prepare for the big event – these are questions Arabella will answer in the television magazine on Saturday.

In the first “Eurostar’s Country Overview”, the Belgian-born actor Serge Falck will present his country in a humorous rap and give more insight on his childhood memories of the contest.

In the crowning conclusion of the first show, the viewers will have the chance to see Petra Frey’s Eurovision entry from 1994 – “Frieden für die Welt”. The Vienna Calling team ranked Austria’s 1994 entry as last – 18th out of 18. If you want to know who are their remaining top entries, watch the show on ORF Wien every Saturday at 7 p.m.

My affection for the Contest spans over 35 years, commencing when Daniel represented Yugoslavia in 1983. Since then, I have been tirelessly following the ESC. My initial first-hand experience was Copenhagen 2001 and have been lucky enough to attend the Contest continuously since 2012.
Over the years, Eurovision has grown and changed tremendously but it is still as amazing as ever!

The third participant of the Serbian final has been selected!