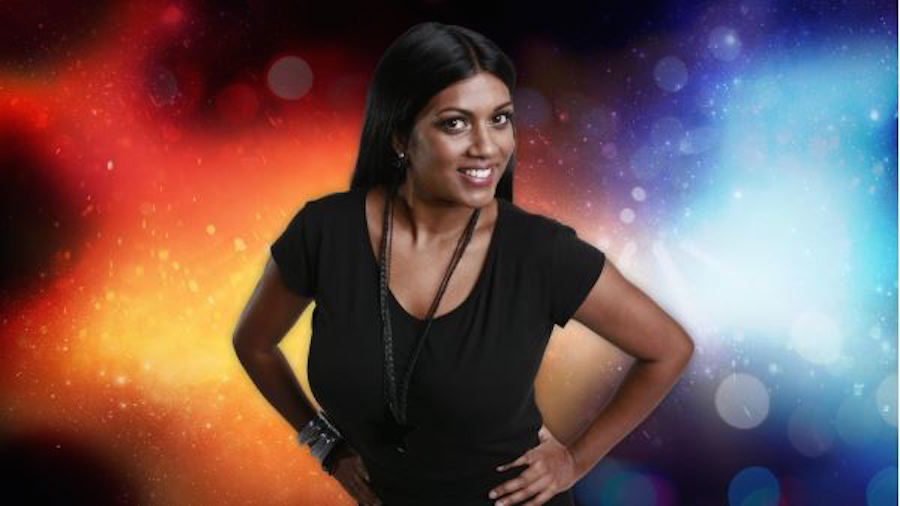 Sara Sukurani is one of ten acts in this year’s Dansk Melodi Grand Prix. Her Bollywood-inspired song ‘Love Me Love Me’ was written by Sara herself, along with the writers of Azerbaijan 2009 – Robert Uhlmann, Arash Labaf and Alexander Papaconstantinou (who also co-wrote Greece 2007 and Cyprus 2012), and she will be first on the stage on Saturday night. The show starts at 2000 CET on DR.tv.

Sara took some time out of her very busy schedule to tell ESC Bubble all about herself, her DMGP journey so far, and what she has planned for Saturday night…

My name is Sara Sukurani, and I was born in Sri Lanka back in 1981. It was my birthday on Sunday! When I was 1 year old, I was adopted and brought to Denmark. My birth mother named me Sukurani, which means “princess of peace”. I thought it was a beautiful name for me as an artist, and I mixed it together with my Danish name Sara.

I am a Law student and studying to become a paralegal assistant. My goal is to work within human rights. I have been working as a singer/songwriter for many years, writing and recording music in USA, London and Sweden.

In 2011, I was nominated for an ‘Danish Music Award – World’ for my single ‘BodiBodi’. The song was released In 19 countries all over the Middle East, on the compilation album “The Best Arabian Nights Party 2012 Ever”. I have also just released my new club music single ‘When Nightsky Falls’, a song that I really love!

I am the first ever in the history of Dansk Melodi Grand Prix to perform a song in Bollywood style, and I feel honoured!

So you probably ask yourself, why am I making this kind of music, when I grew up as a Dane? Well honey 😉 you can not run from your genes or background, no matter where you come from! Its part of me and who I am!

I actually sent in a song last year, but I didn’t hear anything back. Shortly after the DMGP 2014 final they called me, and asked me if I wanted to be part of the DMGP show 2015. I Said YES of course! 😉

I didn’t believe it at first, and I called them a few weeks after the phone call, where they told that they have chosen my song. And I asked if it was a joke? When they confirmed that I was really part of the show, I said “OMG Thanks!”. (People still tease me about that!) When the phone call ended I sat still for a moment, and happy tears ran down my cheeks. I was very happy. I can’t really explain that feeling…

It’s about falling in love, and loving someone so deeply, that you are willing to do pretty much anything to get that guy’s attention. It’s about that intense ‘boom boom’ heartbeat you feel, when you just know that he is the one! I wrote the lyrics for this song, and Arash and Robert Uhlmann worked on the music with me, and my vocal recordings in the studio. They are so talented and really got the best out of me as an artist!

I have been singing the song 15 times a day! It has to sound great, and I have to sound confident in the live performance because I have to dance a lot too, and that can be difficult.

It will be a Bollywood inspired live show, but not in the way people will expect! I can’t reveal too much though! You will have to watch the live show on 7th February to find out!

I don’t know really, you can’t always count on statistics, as it all comes down the live show! But they are all great artists and really nice people!

Yes, lots! Hopefully my performance in this show can open a few doors for me in the future!

Hmm…that’s a really hard question! I think so many of them have been great so I don’t really have a favorite.

It would mean the world to me. To win the competition with this kind of music in Denmark, would be almost impossible, if you look at the history of Music in DMGP. But I do believe that my song is strong enough to win, and I believe in the Danish people! It will bring harmony to a lot of things back home, and in the future new kinds of music could be representing the show. I hope people have an open heart and a open mind. We will see… 😉

There is a reason why I have chosen my symbol ‘the Earth with wings’ as the cover picture for my song. As an artist, I really want to bring something positive to this World! It symbolises UNITY, MUSIC AND PEACE! It’s not naïve, it’s common sense!

I hope you all will have fun and enjoy all this beautiful music that Eurovision brings.:-) And most importantly, have fun!

Sara was also kind enough to film an exclusive greeting for us!

Give a listen to Sara’s entry in Dansk Melodi Grand Prix right here: