The result was determined by a public televote from which two songs qualified.  A jury selected the third qualifier.

The following two acts progressed from the televote:

The final qualification place was then awarded to: 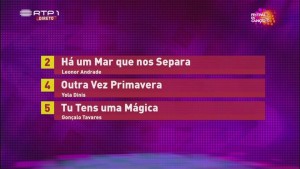 A further six songs will compete on Thursday evening from which three more will join tonight’s qualifiers in Saturday’s final to select Portugal’s entry to Eurovision 2015.