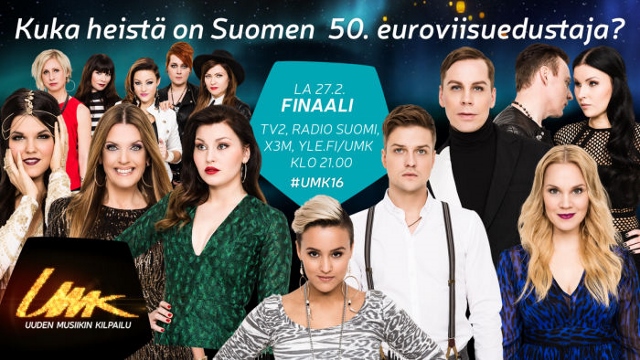 UMK Final Tonight! Who is your favourite?

Tonight at 2000CET, Finland are choosing their entry for Eurovision 2016!

After 3 semi finals, the Finnish public have chosen 9 songs to progress to the final and the winner will be chosen by 50% jury and a 50% mix televoting and online voting. In true Finnish fashion, the 10 jury members have been described as  Eurovision specialists, musicians, media, you-tubers, Finno-Swedes, Members of Parliament, Asphalt Men ( !), children and social-media users

The running order for tonight’s show is –

The bookmakers seem to have this as a two horse race between Saara Aalto and Mikael Saari, but there’s still a chance for every single competitor, and I think it’s a much closer field than the betting odds portray!

ESCBubble have spoken to some of tonight’s contestants over the past weeks, you can read the interviews here

Meanwhile, yle have prepared the acts for the final by sending them to a log cabin in the woods for a bit of team bonding 😉  Watch the video below, beware of Lordi monsters in the night!

Join Krista Siegfrids and Roope Salminen, and me here at ESCBubble, as possibly the best final of the year so far takes place live from Helsinki at 2000CET

I have my personal favourites, but who do you think should win and represent Finland in Stockholm in May? Comment below and I look forward to hearing from you tonight as well!

Zséda speaks about tonight’s Final of A Dal!