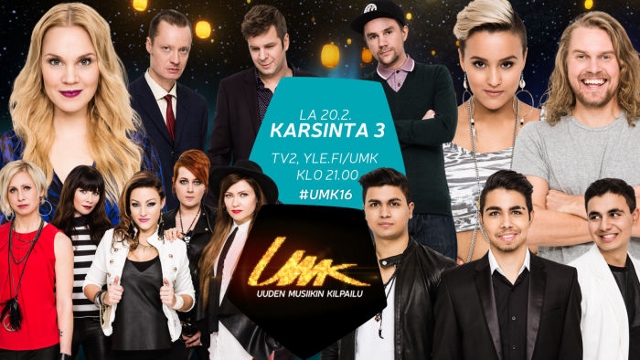 We now have all the Finnish UMK finalists!

Third, and last, semi-final of Finnish national selection for Eurovision – Uuden Musiikin Kilpailu (UMK), hosted by Krista Siegfrids and Roope Salminen, is behind us. So far we now have 9 finalists, who’ll compete next Saturday in UMK’s Grand Final, on February 27th.

Six acts competed in tonight’s show, and the top three qualified for the Grand Final of Uuden Musiikin Kilpailu as usual. Here are three qualifiers, chosen by the televoters all over Finland, who will compete in Grand Final of Finnish selection, next week on the 27th of February, and are thus still in the run to represent Finland at this year’s Eurovision Song Contest in Stockholm, Sweden:

The Grand Final is going to be held in a week’s time! Did your favourite song in the Finnish preselection make it to the final? Are you happy with the results? Have you been satisfied with our live blogging of UMK? Let us know your opinion about the chosen songs who’ll compete next week in Grand Final, in the comments below!

Oscar Zia and Lisa Ajax qualify for the Melodifestivalen final!