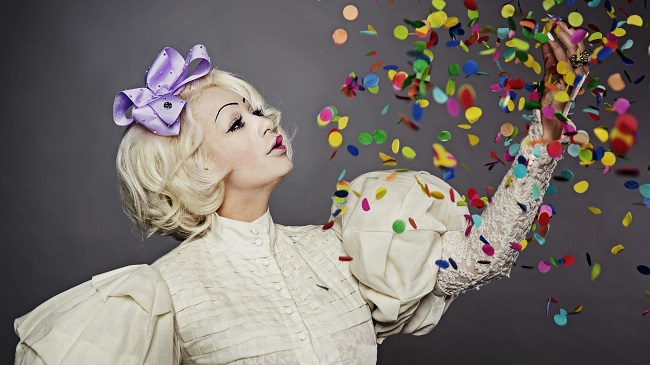 Sada Vidoo ”My uncle was his own kind of person, and that was my inspiration in life!”

Meet Sada Vidoo – a finalist in Dansk Melodi Grand Prix who is competing with the song ”Northern Lights”.
Get to know her better in this interview here.

Congratulations on being selected for Dansk Melodi Grand Prix, Sada! What was your first reaction when you heard it?

OMG that would be a doll dream 😉

Could you tell us a bit about yourself?

Some people call me a doll. Some men have called me their girl. One woman calls me her child. One day you may think I’m too dark – In the night you may say I’m too light. Welcome to my Universe! I’m just Sada Vidoo.”

What is your song about?

It’s about that all people are the same. No matter what language we speak, where we are from or what skin colour we have. All of us are part of the universe and part of something bigger. We are not just ourselves. It’s something magical – underneath the Northern Lights.

What made you decide to participate in Dansk Melodi Grand Prix?

To me, Melodi Grand Prix is the only song competition that brings people together. I have an example from my family: My uncle was homosexual, and unfortunately he died from aids in the 90’s. But the happiest time in my family was when my family watched Eurovision – the international Melodi Grand Prix – together in the living room. My granddad, who was a grocery buyer, was there and everyone kind of understood the same language while we watched the song contest. My homosexual uncle, Henrik, was Conchita Wurst before Conchita Wurst even existed. He was really his own kind of person and that was my inspiration in life and something I really loved.

So in my uncle’s memory, for my family’s pride and to give love the way I know love – that’s why I said yes to participate!

What would it mean to you to win Dansk Melodi Grand Prix?

It would mean that I have a platform where I can give the world a little bit of freedom. I can show everyone my music universe. If I won I would represent such a powerful position and I feel like I could use it to change the world through my music, love and a little bit of magic.

What kind of music do you listen to yourself?

Everything from Rihanna to Abba 😉

What is your favourite food?

Do you have a favourite Eurovision song?

Do you have a message for the readers of ESCBubble?

To believe or not to believe.. That’s what we need in the world again. Hope and inspiration will give us a positive mind and a constant reminder that we are all part of the change in the world. All of us have a responsibility to cherish it with love.

Thanks a lot for doing this interview with us, Sada, and best of luck in Dansk Melodi Grand Prix!

If Sada Vidoo is your personal favorite in this year’s Dansk Melodi Grand Prix, make sure you cast your vote for her in our poll here:

Omar Naber: I wrote “On My Way” 10 years ago, when I felt completely lost