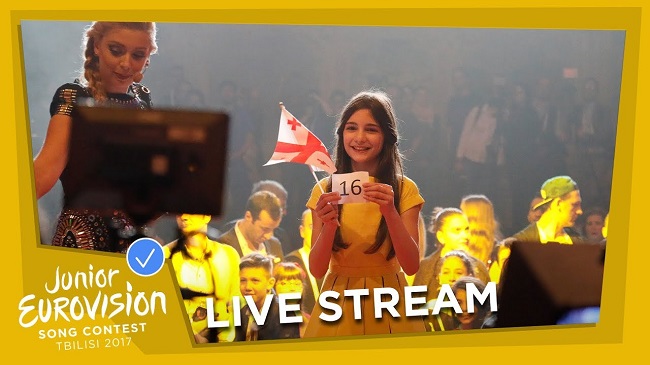 Mariam started by introducing this year’s contestants one by one. They came forward, shook hands with some of the officials, including Executive Supervisor Jon Ola Sand, and then ascended the stairs together with their delegation where at the top Mariam was waiting. After a short interview they would then go through the door to Mariam’s right that led to a small concert hall.

After all the participants were in, it was soon time for the drawing of the performing spot for the host country as well as to see which countries would be opening and closing the contest.

First Grigol Kipshidze was called up and drew number 9! After that, other participants were called up one by one. Mariam would randomly draw a book containing a country from one tree, that country would be called on stage, and randomly take a book from the tree on the other side. Most of them were empty but Cyprus drew a book with #1 and Italy with #16, which means they will be performing first and last respectively during the live show. The running order for the rest of the countries will be determined by the host broadcaster (GPB) and approved by the EBU.

You can watch the whole opening ceremony for yourself right here:

The Junior Eurovision Song Contest itself will take place next Sunday, starting from 16:00 CET. Have you already got your favorites? If you do, vote for them in our poll right here:

Vote for YOUR favorites in Junior Eurovision 2017!