After eight years, Serbia’s national broadcaster organized Beovizija once again, which finished moments ago. Out of a total of 17 acts competing in tonight’s show, a five member jury and televoters have decided that Serbia’s act in Eurovision 2018 in Lisbon is going to be Sanja Ilic & Balkanika with “Nova deca”.

The show was hosted by Aleksandar Stojanovic, Dragana Kosjerina, Kristina Radenkovic and Branko Veselinovic. After all 17 songs were performed, there was a rather long interval act consisting of various former Eurovision entrants from Serbia: Jelena Tomasevic, Sanja Vucic, Bojana Stamenov, Marko Kon, Milan Stankovic, Moje 3, but also other singers from the former Yugoslavia – Regina, Knez, Sergej Cetkovic, and Jacques Houdek.

The full results were as follows: 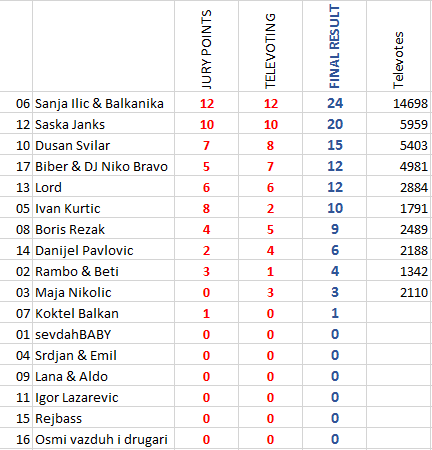 Give a listen to Serbia’s Eurovision entry for Lisbon right here: