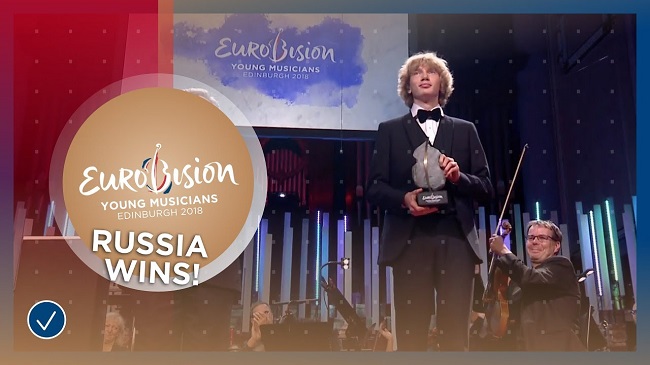 Tonight, in the Usher Hall in Edinburgh, Scotland (the same venue that hosted Eurovision 1972, won by Vicky Leandros) the bi-annual competition Eurovision Young Musicians was held!
The evening was hosted by Petroc Trelawny and Josie d’Arby.

After two semi-finals, held on Saturday the 18th and Sunday the 19th of August, the final showdown was tonight, in which 8 mucisians met!
Below you can see their names, the country they represented, the instrument they played and the musical piece they showcased tonight:

After all the performances, a professional jury (consisting of chair cellist David Watkin,  violinist Marin Alsop, composer and performer Anna Meredith, classical composer and conductor James MacMillan and Head of Music for the Edinburgh International Festival, Andrew Moore) went into deliberation and after that, Sir James MacMillan entered the stage to reveal their winner: tonight’s last performer Ivan Bessonov!

See the grand reveal right here, where Ivan is almost lost for words at his victory, only grateful: