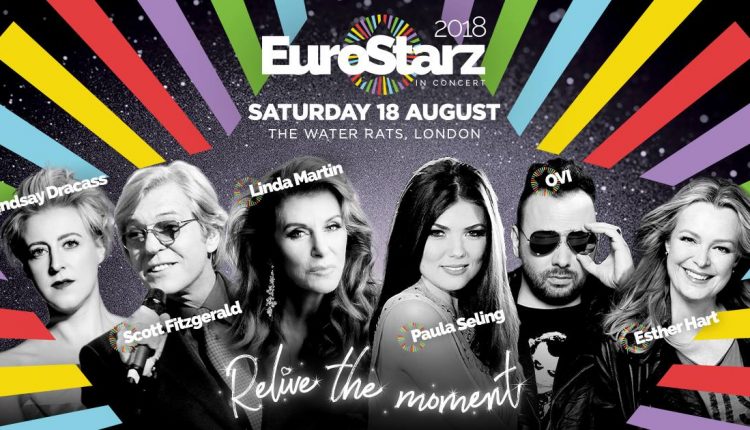 Throw back to the best Eurovision summer concert – EuroStarz! #tbt

All Eurovision fans know that Eurovision is an all year long event. In the so called “quiet months” from right after the Contest finishes in May, up until September there aren’t many Eurovision news going around. However, there are various parties, where our favorite Eurostars are performing. On this Thursday we wanted to look back at what we thought was the best concert and best party of the after-Eurovision season – and that is EuroStarz!

EuroStarz took place on the 18th of August in The Water Rats in London, and a total of six acts held a concert which lasted over two hours. Starting from artists who took part in Eurovision in the 80s, all the way to the 2010s, EuroStarz had it all – Scott Fitzgerald who finished second for the United Kingdom in 1988, two-time entrant and Eurovision winner Linda Martin, Lindsay Dracass who represented the United Kingdom in 2001, the Dutch entrant from 2003 – Esther Hart, the act who scored Romania’s best ever result in Eurovision – Paula Seling & OVI, as well as a surprise performance from the 2014 Cypriot entrant – John Karayiannis.

The concert started off with Esther Hart performing various Dutch Eurovision hits, including “Vrede”, “Amsterdam”, as well as her own “One More Night”.

Scott Fitzgerald started off with Cliff Richard’s “Power To All Our Friends”, and ended with his own “Go”, having the public sing along to every word of the song. Then it was time for Lindsay Dracass, who literally blew the public away with her performances. Starting off with Gina G’s “Ooh Aah Just A Little Bit”, and ending it of course with her own “No Dream Impossible”.

Paula Seling & OVI brought us something different. Starting off with a couple of songs they worked on together with, Paula Seling continued with a cover of Whitney Houston’s “I Will Always Love You”, and a traditional Romanian song. OVI played and sung “Wake Me Up” as a tribute to Avicii, and once Paula joined him back on stage, they performed both of their Eurovision entries – “Miracle” and “Playing With Fire”.

John Karayiannis was a surprise act at the party, and he of course performed his “One Thing I Should Have Done”.

Linda Martin ended the first part of the night with various Eurovision hits – an English version of “Apres toi” by Vicky Leandros, Carola’s “Framling”, but also covered a song by Donna Summer. Her Eurovision hits “Terminal 3” and “Why Me?” followed.

After all of these performances, all of the participating EuroStarz came back to the stage once again, and sang a medley of the biggest Eurovision hits, starting with ABBA’s “Waterloo”, Charlotte Nilsson’s “Take Me To Your Heaven”, Cliff Richard’s “Congratulations”, etc.

Once the concert part had finished, DJ Alasdair played the biggest Eurovision hits until 1am (well, until five minutes before that). Starting from Netta’s “Toy”, the party went on with numerous other Eurovision classics, such as Beth’s “Dime”, Anzej Dezan’s “Mr Nobody”, Sergey Lazarev’s “You Are The Only One”, Jessica Andersson’s Melodifestivalen entry “Party Voice”, and of course – Eleni Foureira’s “Fuego”, the party finished with Knez’s “Adio”.

We would also like to congratulate Michael Woodhead who did an amazing job as a host, and also a massive well done to Tania Dean, Caroline Griffin, and everyone else involved in the organization of this fantastic event. For me personally this was the first time I attended the event, and I’m already looking forward to the next year’s one. I won’t miss it, and I hope I will see you there.