It was a busy weekend for your 2018 Eurovision runner up Eleni Foureira, and ESCBubble was with her for the Tanga! Party in London and the Yass night in Barcelona.

On Friday Eleni performed an extended set at The Grand in London, during the latest incarnation of the amazing Tanga! Party. The crowd enjoyed a mix of classic pop anthems and regular interventions from the original Queen of Pop herself – Madonna.

During the night Eleni wowed the crowd with a double helping of her Eurovision entry ‘Fuego’ and spoiled them to a few of her older Greek hits like ‘Reggaeton’. ‘Mono Gia Sena’ and ‘Vasilissa’. Not content with treating them to her own songs we also had covers of contemporary hits like ‘Anywhere’ by Rita Ora, ‘One Kiss’ by Calvin Harris/Dua Lipa and ‘X’ by Nicky Jam/J Balvin.

Check out Eleni’s performance of “Fuego” at the Tanga Party in London: 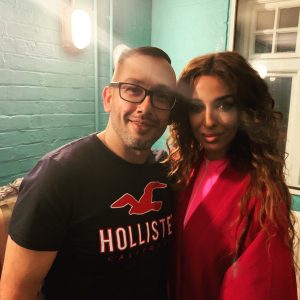 In Barcelona, Eleni arrived to inaugurate the new era of Saturday nights party in the city with “Yass!” The new parties are to be held in Barcelona every Saturday at the Safari Disco Club where you can find the pop songs of today and many classics for you to dance the night away and “Yass!” you will have many Eurovision Bangers every time. For more diverse sounds the club includes a space for the lovers of house music itself.

Eleni arrived in the city and was treated like the pop queen that she is! We had the chance to catch up with her and spill some tea!

She was very excited to be performing once again in Barcelona, a place she calls her second home. After a flawless sound check and dance rehearsal we had a sneak peak of the video of ‘Tomame’ and the only thing we are allowed to say is that is going to be amazing and very “Foureira”.

‘Tomame’ itself is composed by the great Alex Papacontantinou. Known in the music industry as AlexP, he is the composer of ‘Fuego’, ‘La la la love’ and ‘Always’, so you can probably guess ‘Tomame’ is going be dancy, catchy and sexy! (We wish we could reveal more!!).

Later Eleni told us about her partnership with ‘Make A Wish Greece’ where she will help make the wishes of children with cancer come true, an extremely lovely gesture of the queen of Greek pop. At one point she said that she would auction parts of her artistic wardrobe for charity. Sadly it will not be that Vrettos Vrettakos jumpsuit that she wore during Eurovision since it’s on his atelier in Athens.

During her performance in Barcelona she had a special surprise for none other than Ahmad Halloun, one of our ESCBubble editors, where on stage she thanked him for all the support during Eurovision! This involved a kiki challenge twerking and nothing less than the sexy ‘Fuego’ choreography! From ESCBubble to Eleni and her team – you are more than welcome!

Her new single ‘Tomame’ will be released this Friday and check back with ESCBubble to hear what we think will be another international smash hit!

The fuego is relit! Eleni Foureira returns with her reggaeton smash ‘Tomame’