It’s been a bumper week for new music within the world of Eurovision.  We’ve looked far and wide for anything new from former ESC acts and have also kept an eye out for former National Finalists too!

We start this week with Timebelle, the three piece 2017 Swiss Eurovision entrants.  Their entry ‘Apollo’ didn’t quite have enough to reach the grand final finishing 12th in the 2nd semi final, but despite that setback they’ve continued to release new music.  This is their second collaboration with Romanian producer Soundland, following their hook up ‘Come Around’ from Autumn 2017.  Their second song together is called ‘Heartache’:

Your 2014 winner from Austria is back and has teamed up with the Vienna Symphony Orchestra for an album and tour of the forthcoming album ‘From Vienna With Love’ (released on 19th October). The second single from the album is titled ‘Für mich soll’s rote Rosen regnen’ (Eng: ‘It Should Rain Red Roses For Me’) and I’ll allow Conchita to describe how she sees the song: 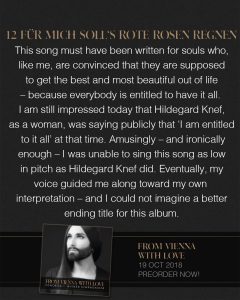 If you thought vampires were dead after Eurovision 2007 you’ll be please to see the return of DJ Bobo with some new music.  His Swiss entry ‘Vampires Are Alive’ was one of the bookmakers’ favourites to win the contest, however he lost his stake finishing in a bloody 20th place in the semi final.  His latest single is the unusually titled ‘Yaa Yee’ and you can check it out below:

Gjunesj Abasova, better known as GUNESH, has been a regular at the Belarusian National Final, taking part as recently as this year where she finished 2nd with ‘I Won’t Cry’.  She also took part in 2005, 2006, 2008, 2009, 2010 and 2015 and has yet to finish with that golden ticket to ESC!  The closest GUNESH has come to winning a contest was in Turkvision 2013 where she finished 2nd with 205 points with her entry ‘Son Hatiralar’ losing out by just five points.  She’s now back with ‘мы взяли одну высоту’ (Eng: ‘We Took One Height’):

Croatian singer Nina Badric is also no stranger to the Eurovision selection process, having entered four times – 1993 (7th), 1994 (10th), 1995 (18th) and 2003 (2nd).  She did however finally get the chance to go to the contest after being internally selected in 2012 with the song ‘Nebo’.  Unfortunately for Nina it only placed 12th in Semi Final 2 and therefore failed to qualify.  Since 2012 she has continued making music and is also a well known as an established actor.  Her latest release is titled ‘Rakao Si’ (Eng: ‘You Said’):

Isaiah – Close To Me

The 2017 Australian entrant Isaiah Firebrace is back!  This is his second release since his 9th place finish in last years Grand Final with the ballad ‘Don’t Come Easy’.  His previous single ‘Streets Of Gold’ was released last July and so after a wait of over a year for some new material from him we finally see his return.

Isaiah described the delay as follows:

Over the past year I’ve taken the time to work with many producers and writers to get my sound right, and ‘Close To Me’ is a true representation of where I’m at musically.

The song is about knowing when you’ve done the wrong thing and being able to recognise that and put things right, but it’s also about hope and knowing that things are better when you are with the right person. I think most people can relate to that.

I’m just so happy to share this song with my fans and I hope they love it as much as I do!

Listen to ‘Close To Me’ here:

Two weeks ago we brought you news of a new single from Robin Stjernberg called ‘I Don’t’.  Now the 2013 Swedish Eurovision representative has turned that single in a whole EP of new songs.  Featuring a mix of styles from funky pop through to the ballad ‘Always’, here’s the ‘Under Water’ EP:

Douwe represented The Netherlands in 2016 at Eurovision and he continued the country’s excellent recent run of results by finishing in the Grand Final in 11th place.  He’s been pretty quiet release wise since ESC and so if you’re a fan you’ll be pleased to see he’s back with a very 80’s sounding release called ‘Shine’.  The video for the song features Douwe in a suit designed by 11 years old Yens de Vries:

Regulars to our weekly article will know that Molly Hammar has been rather prolific this year with both her own releases and other singles that she’s featured on!  So we’ll let the music to do the talking and present her latest release ‘Drive’ to you:

Well this was definitely the most interesting release of the week when it comes to the story behind the song!  Melodifestivalen 2017 participants and all round jokers De Vet Du return with a song dedicated to people who use social media to try and get famous through their ‘profile’.

The added spice to the story comes from references to Junior Eurovision 2006 runner-up Bianca Ingrosso, who is also the sister of 2018 Melodifestivalen winner Benjamin.  Bianca accused Johan Gunterberg of the group of trying to hit on her during last year’s Melfest and that he refused to give up when she declined his advances. In ‘Profil’ Johan makes reference to Bianca’s own profile when he sings “I want to be a profile, go on a journey with Bianca Ingrosso’s profile”:

Elisabet Ormslev – Let Me Go (Do You Love Me)

Elisabet has not only entered Iceland’s selection process for Eurovision in 2016 but will also be able to pick up some helpful tips if she ever does go, her mum Helga Möller was part of the group ICY in 1986 finishing 16th with ‘Gleðibankinn’.

Elisabet herself didn’t quite make it out of Songvakeppnin, finishing 6th with ‘Á ný‘ although she did win the jury vote.  She’s now back with an English language song titled ‘Let Me Go (Do You Love Me)’:

Małgorzata Uściłowska, better known as Lanberry, took part in the 2017 Polish selection process, Krajowe Eliminacje where she finished 6th with ‘Only Human’.  She also co-wrote two of this years Polish finalists – ‘Nie chcę Ciebie mniej’ by Saszan (6th) and ‘Błysk’ by Maja Hyży (7th).  Her career has gone from strength to strength with her previous single ‘Gotowi na wszystko’ becoming her first number 1 on the Polish charts.  Have a listen to her new single ‘Heart Of Gasoline’ here:

Russian 2016 Eurovision runner-up Sergey Lazarov, released ‘Shyopotom’ or ‘Шёпотом’ (Eng: ‘In A Whsper’) last year, however he’s decided to make for it at video at last!  He has concurrently released a couple of remixes to the take the song to the dancefloor, and you can check them out here:

You can listen to their new singles and all of the other songs featured in this article on our ESCBubble October New Music Playlist on our home page or by clicking here.

Let us know whose new single you enjoyed the most this week on our social media  and don’t forget to come back to ESCBubble on Friday for a new release from one of the biggest artists of Eurovision 2019…..

Montenegro will take part in Eurovision 2019!

Melissa & Marco sing ‘What Is Love’ for Italy at Junior Eurovision!

Dario: "When it comes to songwriting, I’m always…