He took Ireland back to the Grand Final of Eurovision after a five year drought, finishing in 16th place with the touching ballad ‘Together’ and now Ryan O’Shaughnessy has returned with a track with the same name as his current tour named ‘Civil War’:

You can now buy and stream Civil War on all platformsMany thanks to all involved – Ava Kay, Tino Zolfo, Matt Weir,…

The track is a melancholy downbeat one comparing a relationship to a Civil War and trying to find the better aspects of being together with someone in a stormy companionship.

Before the worst begins

Let’s make it through the night

This is a Civil War

As mentioned Ryan is also currently on tour around Ireland and he can be seen at the following locations: 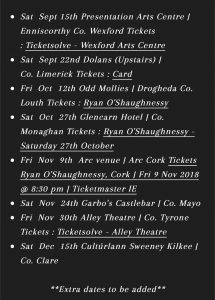 Check out ‘Civil War’ on both YouTube and Spotify below:

What do you think of Ryan’s new single?  Let us know on our social media channels!

Saara Aalto will participate in ‘Dancing On Ice’ in 2019!