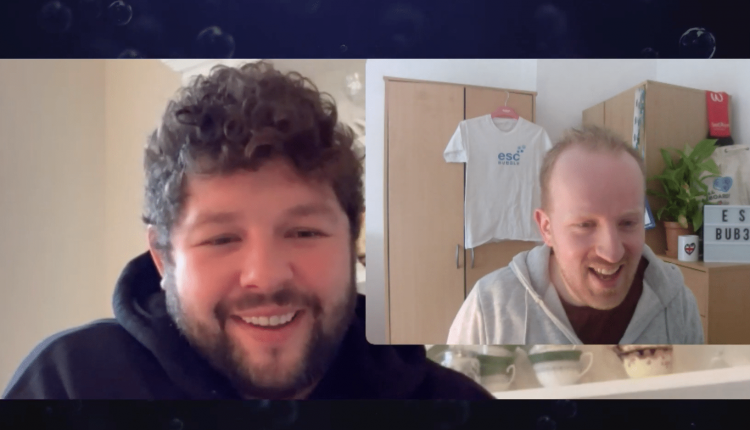 James Newman: “I was working in a restaurant when I had a number 1 hit”.

Our editor Matt spoke to the singer who was chosen to represent the UK this year, James Newman.

How did James first get into music?

As a child, Newman became interested in music, and wrote and produced songs with his younger brother John.

In 2012 James featured on Rudimental’s Feel the love which went straight to Number 1 in the UK. (You can see the video for this below):

The following year in 2013, James then co-wrote Rudimental and Ella Eyre’s hit “Waiting All Night” which just like Feel the love also went to Number 1.

Newman won the “Brit Award for British Single of the Year” during the 2014 Brit Awards for co-writing Waiting All Night with Jonny Harris.

Later James co-wrote with his brother John and with Calvin Harris in the latter’s song Blame featuring vocals by John.

The song, topped the UK singles chart again, in addition to peaking in The Netherlands, Sweden, Finland and Mexico. It reached number 19 on the Billboard Hot 100 and topped the US Billboard Hot Dance/Electronic Songs chart.

Newman was also a co-composer of a number of songs including Let ‘Em Talk on Kesha’s 2017 album Rainbow.

James was a featured vocalist on several songs including the 2018 hit Therapy by Dutch DJ Armin van Buuren. The song charted in the Netherlands, Belgium and on the US Dance/Mix Show Airplay chart.

In the same year James was also featured on the song Lights Go Down, a song by the Norwegian music producer and DJ Matoma in his album One in a Million.

In 2019, James was featured on the Armin van Buuren song High on Your Love which you can see below:

Then in February this year, the BBC announced that James would represent the UK in this year’s Eurovision with the song My Last Breath which James co-wrote with Adam Argyle, Ed Drewett and Iain James.

James talks in the interview about the brief that he was given by the BBC and record company BMG. You can see the music video and our interview with James below:

Below are the songs that James mentioned as some of his favourite songs. Weve also put a video created by Amir Cohen, showing how he visualised how the UK staging could look, with an image underneath showing how it actually would’ve looked.

Hurricane to represent Serbia in Eurovision 2021