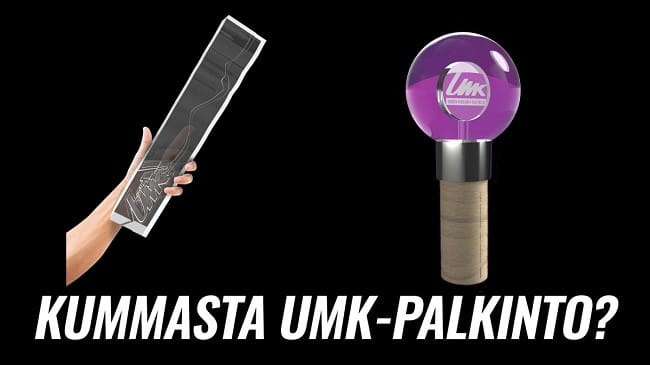 Which will be the new UMK award?

This article’s title says it all, that’s what the text on this article’s header translates to in Finnish: ”which UMK award?”

For their annual national final, Uuden Musiikin Kilpailu (UMK), broadcaster YLE have organised a competition to find a fantastic UMK trophy that will be given to future UMK winners.

The competition was announced back in June and after having received 24 proposals, both from Finland and abroad, a design jury have chosen their two favourites.

The members of the jury were product designer Saara Renvall, Design Forum’s executive director Petteri Kolinen, UMK producer Anssi Autio and online producer Sandra Saulo.
They comment: ”The level of competition was high, which made the work of the jury challenging but even more interesting.”

These are the two final proposals:

Before the Party Starts

Resting on the table, it resembles a sturdy microphone but the prize is not any lifeless chunk. The ball works in the same way as snowballs that each of us has held in our hands at least once in our lives. The glitter flowing in the ball is like a beautiful reminder of the confetti dropping on top of the winner.

The prize of the Finnish New Music Competition must represent Finnish values, be elegant, responsible and, above all, impressive. As a result, the idea behind the HH20 Award is a pure and clear design language that celebrates the flow of new music in all its simplicity.

Those with a YLE account can vote for their favourite design via this link until the voting closes on the 16th of October.

The winner will be announced during a press conference in January, when the UMK finalists will also be revealed!

These are the hosts of Junior Eurovision 2020