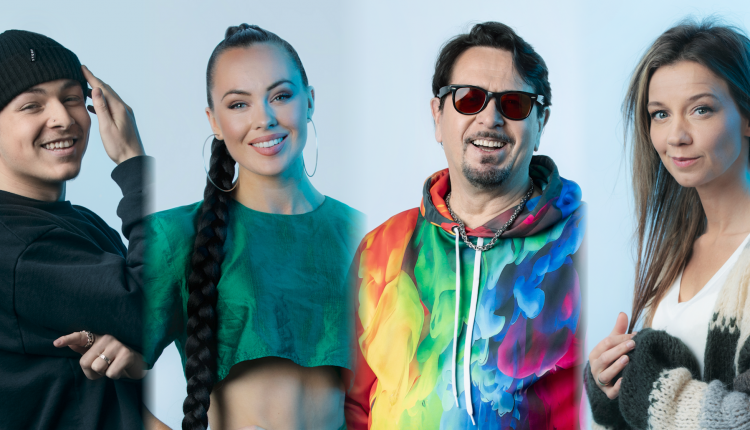 Meet the participants of the second Semi Final of MGP 2021, and vote for YOUR favourite!

Norwegian national broadcaster NRK just held a special press conference where they revealed the artist participating at the  second semifinal of Melodi Grand Prix 2021, which is going to take place this Saturday, 23rd of January. In total, a record number of 26 songs are participating at this years Melodi Grand Prix. Twelve of these will be competing in the final, six pre-qualified artists and six finalists voted by the audience. Five semi-finals one is being held each Saturday started from 16th of January, are having the artists in duel against each other for the ticket to the final. In addition to this NRK has introduced a wildcard round so the audience will get a chance to choose the last finalist from the artists which were eliminated in the semi-finals. All the shows are broadcasted without any audience due to the ongoing pandemic, from Fornebu, H3 Arena. The hosts are Ingrid Gjessing Linhave, Ronny Brede Aase and Kåre Magnus Bergh.

Raylee Charlotte Kristiansen was announced as Melodi Grand Prix veteran given the fact that she took part twice before with “Louder” in 2015 and she was the finalist with “Wild” last year. The song has been streamed over 6 million times on Spotify and she was praised for her performance and loved by Eurovision fans outside Norway. Raylee released her first album already as an 11-year-old. Then she was known as the child star “Lotta”. In 2008, she played the lead role in the musical “Annie”. In 2020, she had a number of major appearances, including Allsang på Grensen, Raylee has participated in Stjernekamp on NRK in 2014, and in 2015 while in 2016 she danced all the way to the third place of music show “Skal vi danse”. She revealed that with her song we will be going back to the 80’s with her entry which she also describes as a power song.

Maria Solheim is 38 years old but she moved to Oslo after she got her first contract with a record label as a 17 year old and her debut album Barefoot was released in 2001. By the time of her fourth album release back in 2006 Maria had toured around Asia, USA and Europe. Maria has sung in both baptism and confirmation to Norwegian Princess Ingrid Alexandra. In 2013 and 2019, Maria received the State’s one-year artist scholarship for her songwriting and after winning several awards and recognition for her music work Maria is working on her seventh solo album which is expected to be released in 2021.  About her entry “Nordlyset” (Northern light), Maria said that it is about finding home and she was allowed to translate it to Norwegian language.

Daniel Johansen Elmrhari is a 21 years old artist. As a child his first interest was dance while singing came a bit later. As a 10 year old he took part in Norway’s got talent 2010. Since then, he has performed on various stages all around Norway. In 2015 he released his first song and now Daniel Owen is fully committed to combine studies with a career in music and the R&B genre that is closest to his heart.

Ketil Stokkan is someone known to Eurovision audience as he represented Norway in 1986 with the song which became a huge Norwegian hit “Romeo” at Eurovision the song ended on 12th place with 44 points. The second time he was part of Eurovision was in 1990 when after he won MGP with “Brandenburger Tor” (The Brandenburg Gate) at the contest he got only 8 points which was enough for 21st place. But his first Melodi Grand Prix appearance dates back to 1983 when he performed “Samme charmeur” which ended on second place. Ketil works as a teacher in primary school and at the same time he performs many concerts every year.  He revealed that he wasn’t planned to join again at the MGP stage but given the fact that there is nowhere else to “show off” he is part of the show, he added that he is happy to be selected from 1000 submitted songs, says Stokkan. He has participated in MGP three times before, the first time in 1983 with “Samme charmeur” which he came in second place with. In 1986, Ketil Stokkan won the Norwegian final in the Melodi Grand Prix with the immortal «Romeo», and got a 12th place in the international final. In 1990, he again won the Norwegian final with the Brandenburg Gate. – I am more nervous now than I have ever been. Stokkan began his musical career in various bands already in middle school. In 1977 he became a member of the ZOO from Stokmarknes, and released 6 albums with them, of which 2 of these were awarded gold plate trophies. The most famous songs from the period with ZOO are “Evig Ung” and “Wait, do not hang up”. Then followed a period with various dance band projects and solo albums. Stokkan has released four albums and several single songs / singles in the period 2011-2017. The latest album, “Nu kjør vi”, was recorded live in Trondheim in 2017. Now both Ketil and his band, “Funky Ducks”, are waiting for the pandemic to let go, and for the concert market to reopen, but first it’s MGP for the fourth time.

You can listen to all four songs on Spotify. Once you listened to the songs, let us know which of these four is YOUR personal favorite by voting for it in our poll here:

TIX performed his entry in the first semi-final on Saturday 16th of  January. TIX is the stage name of Andreas Haukeland (27) from Bærum. Growing up Andreas has been diagnosed with Tourette’s syndrome so he chose to own the nicknameTIX and made it his stage name. In 2015, he had his first major breakthrough with the Russian song “Sheikh” which became this year’s party song for the Russians. Later on he distinguished himself as a songwriter at home and abroad with the world hit “Sweet but Psycho” with Ava Max, which became the most played song of the year. Since then, TIX has had seven songs as number 1 on Spotify in Norway, and along the way he has conversely both grandmothers and children to fans. During the corona spring 2020, the song “Karantene” became a huge hit. So far TIX has been a participant in Paradise Hotel and a judge in Idol.

“World On Fire” will be released on Friday 5 February  as Atle Pettersen will perform in the fourth semi-final, scheduled for Saturday 6th of February. Atle is 31 years old vocalist, songwriter and host from Skien. The audience  previously knows him as the vocalist of the bands Above Symmetry and The Scheen. In 2014, The Scheen won the Emergenza festival, the world’s largest music competition for unsigned bands with as many as 34,000 participants from 150 countries. Atle Pettersen had his breakthrough in X Factor in 2010, and the same year released “Light on” his debut single as a solo artist. Following year his debut album “Based on a true Story ” was released.  He won the show “Skal vi danse” in 2011 and for the past four years Atle is the host of “Beat for Beat” on NRK. As a songwriter his recent work includes “Darkside” for Alan Walker and last autumn, Atle released his first Christmas album “Tusen Julelys” (Thousand Christmas Lights).

“Barndomsgater” will be released on January 22, as they will be perform in the second semi-final scheduled for Saturday 23rd of January. The four artists who make up Stavangerkameratene are known to the large TV audience. Kjartan Salvesen won Idol back in 2004, Tommy Fredvang is known from X Factor 2009 and Stjernekamp 2015, Glenn Lyse won Idol in 2007 and Ole Alexander Mæland has been the vocalist in the band Elle Melle and he participated in The Voice Norway in 2012. Four years after their debut they have two albums released and over 50 million streams on Spotify,  several gold and platinum records and they had concerts all around Norway which makes them one of the most popular Norwegian live bands.

“Feel Again” will be released on Friday 29th of January, given the fact that Kaja Rode will perform in the third semi-final scheduled for Saturday 30th of January. She is a 22-year-old singer from Oslo known to the audience as a participant of The Voice Norway in 2017. Even though she is young, Kaja has performed on several stages and has experience of performing at various events. She studies Retail Management and develops her skills as a songwriter.

His song will be released on Friday, 12th of February as Rein Alexander will perform in the fifth semi-final scheduled for Saturday 13th of February. Last year he competed in the final of Melodi Grand Prix with the song “One Last Time”, he has been performing concerts in various countries including Norway, USA, Iceland, Italy, UK and Sweden while he also played roles in several musicals and opera. He was: Jean Valjean in “Les Misérables”, Anatoly in “Chess”, Terje Vigen, Caston in “Beauty and the Beast”, Shere Kahn in “The Jungle Book”, Anton Fugger in “Which Witch” and more. He has received awards at schools such as Royal Academy of Music and The Reykjavík Academy of Singing and Vocal Arts. In 2003, the Norwegian people voted him to victory in the NRK program Kjempesjansen.

KEiiNO performed in their song “Monument” first semi-final last Saturday. The winners of the audience vote from Eurovision 2019 with 291 points for “Spirit in the Sky”, KEiiNO are back to the show which launched their career in 2019. Their Eurovision entry was also nominated for a nominated for Spellemann award (Norwegian Grammy) in the categroy Song of the Year. So far they have released  14 songs that have so far been streamed over 60 million times. And recently released an album named “OKTA”. They said that “Monument” is about the traces we leave behind, the experiences we remember, the strong relationships we have. It is a tribute to those who enrich the lives of others, but who do not get statues erected or streets named after them. Don’t forget to watch our Q&A with KEiiNO which is available HERE!

Blåsemafian is one of the most renowned brass bands in Norway and Europe and consists of Sigurd Evensen (27) from Oslo on trombone, Stig Espen Hundsnes (32) from Stord on trumpet and Jørgen Lund Karlsen (27) from Fredrikstad on saxophone. They collaborated with famous artists such as Marcus & Martinus, Madcon, Cezinando and Angelina Jordan. Featuring artist at their entry “Let Loose” is Caroline (Hazel) Teigen. You can read our interview with Blåsemafian HERE!

From Nina Kraljić to Tony Cetinski & Kiki Rahimovski – Here is the running order of Dora 2021!