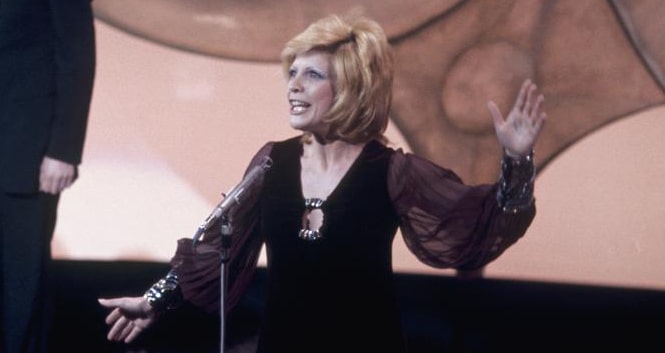 This day marks a lovely celebration in Eurovision history as it’s the 50th anniversary from Eurovision Song Contest 1971 where Monaco became the only microstate to ever win the show. So what a better way to celebrate than getting remembered of the amazing edition of the contest which happened a half of a century ago.

The 16th edition of Eurovision took place at Gaiety Theatre in Dublin, Ireland following Dana’s win with “All Kinds of Everything” in Amsterdam and it was hosted by an Irish television presenter Bernadette Ní Ghallchóir. It is good to note that his was the second time RTÉ did an outside broadcast in colour, the first had been earlier the same year for the GAA Railway Cup finals. Several days later the contest was broadcast in Iceland, the United States and Hong Kong. The total of 18 countries participated in the show equaling the record set by Eurovision 1965 and 1966. Belgium, Germany, France, Ireland, Italy, Luxembourg, Monaco, Netherlands, Spain, Switzerland, United Kingdom and Yugoslavia were joined by Austria who returned to the contest after their two-year absence, while Finland, Norway, Portugal and Sweden all returned after their one-year absence which was caused by them protesting the four-way tie which happened in 1969. It also featured a first debut after Ireland 1965 as Malta joined Eurovision. The only country which participated in the previous editions of the show but hasn’t joined Eurovision 1971 was Denmark who came back to the show in 1978 after 11 years of absence. It was a first time preview shows were introduced which obligated all participating countries to provide a music video of their Eurovision entry and to broadcast all of the participating songs ahead of the contest.

Eurovision 1971 featured songs in 13 languages, 4 songs in French, 2 in English and Dutch and 1 in Maltese, German, Spanish, Italian, Swedish, Portuguese, Serbo-Croatian, Finnish, Norwegian and Viennese German (a city dialect spoken in the Austrian capital). It featured 13 solo acts 2 duets and 3 groups (if we count the Finnish act as one of it too given the fact that Markku Aro had the support of The Koivisto Sisters). Two artists made their return to the show, Jacques Raymond represented Belgium in 1963 and Katja Ebstein ended on third place at her debut the year before and she also made the return to the contest in 1980. Katja wasn’t the only artist which took part at Eurovision 1971 who made their return to the show, alongside her the ones who made their return were Swedish band Family Four the following year, Italian singer Massimo Ranieri at Eurovision 1973, Finnish Anja Koivisto of Koivistolaiset who came back at Eurovision 1976 as one of “The Friends”, Swiss group Peter, Sue and Marc who returned in 1976, 1981 & 1976 with Pfuri Gorps & Kniri, Norwegian singer, Hanne Krogh who came back to Eurovision 1985 as a member of the winning duo, Bobbysocks and later in 1991 as member of Just 4 Fun.

After the juries of all participating countries presented their votes it was revealed that Séverine with “Un banc, un arbre, une rue” who represented Monaco won with the record amount of 128 points, following the new voting system. Spain was the runner up getting 116 points represented by Karina who sang “En un mundo nuevo” and Germany ended on third place with Katja Ebstein – “Diese Welt” who got 100 points.This edition of the show also introduced some new rules as the rule of performing solo or as a duet was abolished and it was the first time when groups of up to six people were allowed to perform at the Eurovision stage. And the voting system changed. For the first time votes of each country were decided by two member jury (first being older and the second younger than 25 with at least ten years difference between the ages). Both of them could award between one and five points for each of the countries, except their own. The minimum amount of points jury of each country could award was 2, maximum was 10. This voting system meant that no country could score fewer than 34 points (17 countries voted) and the maximum score being 170. The same voting system was used the following two years for the Eurovision 1972 and 1973 before it got changed for the contest held in 1974. You can check the first part of the exciting voting HERE, the second HERE and the last one HERE.

Séverine (Josiane Grizeau) is a French singer born in Paris on 10th of October 1948 and she won Eurovision 1971 with, “Un banc, un arbre, une rue”, was composed by Jean-Pierre Bourtayre and the lyrics were written by Yves Dessca. It reached the Top 10 in Belgium, Norway, Ireland, France, Switzerland & United Kingdom. The song had the German language version “Mach die Augen zu” which made to top 20 in Germany in addition to it it was recorded in English . with the title “Chance in Time”  and Italian as “Il posto”. Séverine took a chance at the German national finals in 1975 and 1982 but hasn’t succeed to win the Eurovision ticket. The last time Monaco took part at the final of Eurovision was in 1979, they came back to the show in 2004 and withdrew in 2006 without managing to qualify through the semifinal round in those three years. You can check the performance of “Un banc, un arbre, une rue” at Eurovision 1971 below

Would you like to see Monaco return at Eurovision Song Contest? What are your impressions of Eurovision 1971? Let us know in the comments below and at our social media links!

The Public Reacts to North Macedonia: Vasil – Here I Stand