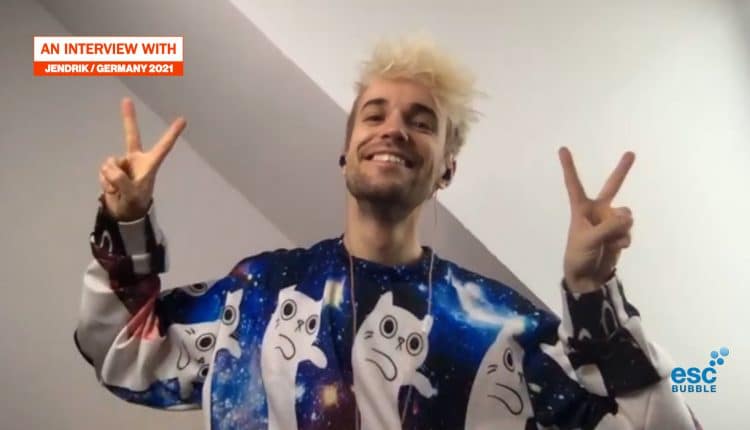 Jendrik: “It’s fun to sing that song. I haven’t gotten sick of it, yet!”

“There’s two different types of hate,” Jendrik says. “For example, there’s the shallow hate, saying ‘Oh your song sucks and your hair looks weird’, and then you can say, ‘Ah I don’t care about that!’.

There’s the other kind of hate, the disrespectful hate, the hurtful hate. Which is homophobia, which is racism, which is sexism, which is a religious hate. All those different kinds which I am trying to put into the music video and the stories. And there, I say, you should not ignore it. You should not laugh about it, you should act upon it.”

Jendrik has been internally selected by Germany’s national broadcaster NDR to represent the country at the 2021 Eurovision Song Contest in Rotterdam. ESCBubble’s Cain caught his attention for 10 minutes to hear more about his whimsical entry “I Don’t Feel Hate”, which so far has inspired many people to confront their bullies.

Not being a household name forced Jendrik to document the process of creating his colourful music video to the song on social media, hoping someone would notice. Funding, shooting and editing the video himself, with the help of his family and friends Jendrik has become an accessible role model for the optimist to realise his dream of being on stage at Eurovision.

In our interview, we also find out how he plans to spend his time within the COVID-safe delegation bubble during the two weeks in The Netherlands in May. The 65th Eurovision Song Contest will be broadcast live May 22nd at 9pm CEST. Give him your 12 points so he doesn’t have to alter the title of his song!

My earliest Eurovision memory is Gina G representing the UK in '96, the song was a big hit in Australia, and is still played in my local gay bar! These days, I imagine I'm fluent in Italian, singing 2015's Grande Amore passionately to everyone stupid enough to watch me! Being in the audience, in that stadium for the first time, in Vienna, has naturally solidified its place as my favourite final.

Eurovision is one of those rare moments where work and pleasure harmoniously intertwine. I felt like I'm in the right place, doing exactly what I'm supposed to be doing.

Michael Rice progresses to ‘All Together Now’ Final in Russia

Carola to be the Swedish spokesperson for Eurovision 2021!

Listen to the French entry for Junior Eurovision 2021 – ‘Tic Tac’

Enzo to perform ‘Tic Tac’ for France at Junior Eurovision 2021!

Enzo to perform ‘Tic Tac’ for France at Junior…

41 countries to compete in the Eurovision Song Contest 2022!

Igor Cukrov is ready to compete in Croatia’s Dora…