Lady Gaga to perform at this year’s Eurovision?

Google have listed Lady Gaga as performing at this year’s Eurovision Song Contest.

At the time of writing (16:30 CET) under the singers Google listings it says that she will be performing on 22nd May (the date of the final) at 21:01 at the Ahoy Arena in Rotterdam, the venue of this year’s contest. 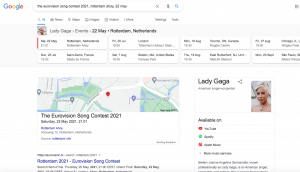 Could this mean that Lady Gaga will be performing?

The Eurovision Song Contest has previously had a number of big name performers as part of the interval act, including Justin Timberlake in 2016 and Madonna in 2019.

This year isn’t the first time that Lady Gaga has been rumoured to be performing, with reports that the singer was originally approached to perform at the interval at the 2017 contest.

Below you can see Justin Timberlake’s performance at the interval of the 2016 contest, aswell as Madonna’s performance underneath this:

ESC Bubble will let you know of any updates.

What do you think of the news? Would you like to see Lady Gaga perform at the contest? Let us know in the comments section below!

Molly Sandén will be performing at Oscars pre-show!

Day 5 Rehearsals : Bubble Round Up

Day 5 Rehearsals : Bubble Round Up

Go_A on performing at Eurovision: We will release our other…

Live Q&A with Scooch this Thursday

Montaigne: “I’m in my bedroom, which is…