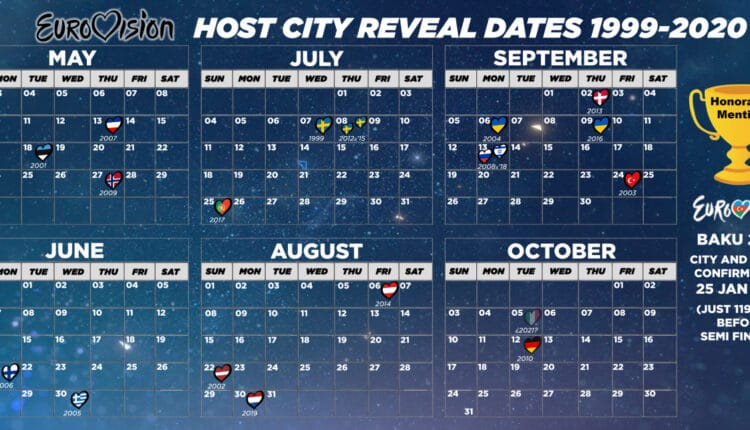 How soon could we know the host city for Eurovision 2022?

The leaves are starting to change colour and fall across Europe, yet we still do not know the host city of next year’s Eurovision Song Contest, the first to be held on Italian soil in 31 years. So, just how unprecedented is this?

Looking back at previous contests provides some insight. Over the last twenty years, host cities tend to be known by early September, however, there have been several exceptions. For instance, the announcement of Rotterdam as host of the 2021 Contest came quite early when it was revealed at the end of Eurovision: Europe Shine a Light on 16 May 2020.

The last time Italy hosted the Contest in 1991, eventual host city Rome was not chosen until January of that year. This was due to security concerns over the Gulf War that forced organisers to move the Contest from the Ligurian seaside city of San Remo to a film studio in Cinecittà on the outskirts of Rome.

Should no host announcement come within the week however, Italian broadcaster Rai will tie German broadcaster NDR for the second-latest host city announcement of the 2000s. Düsseldorf was chosen as host city on 12 September 2010. The only time a host city decision came later was the following Contest in Azerbaijan. While the choice of Baku as host city was no surprise to anyone, the construction of Baku Crystal Hall delayed the official announcement to 25 January 2012, a mere 119 days before the broadcast of Semi Final 1!

The European Broadcasting Union has not published any deadline for Rai’s host announcement, leaving fans wondering if the Contest will be staged in Bologna, Milan, Pesaro, Rimini, or Turin, the only five cities that remain in the running. Rai has admitted that there has been a delay to ensure “transparency and precision” in its host city choice.

Municipal elections were held in Italy on 4 October, so it is possible that Rai has delayed its announcement until the conclusion of the electoral campaign. Candidates running for election in several host cities (notably Bologna, Milan, and Turin) are involved in their Eurovision hosting bids, and it is thought that announcing the host city earlier could have given an unfair boost in the polls to one or more candidates in the winning city.

With the elections now over, hopefully Rai will not keep fans in suspense for much longer and we will all know the host city of the 2022 Eurovision Song Contest very soon!

The Netherlands Confirms Participation And Opens The Application For Junior Eurovision 2022!

Jovana and Dunja to represent Serbia at Junior Eurovision 2021!

Melodi Grand Prix 2022 brings changes to the format of the show!

Melodi Grand Prix 2022 brings changes to the format of the…

“If Dua Lipa can’t win Eurovision, we need to…