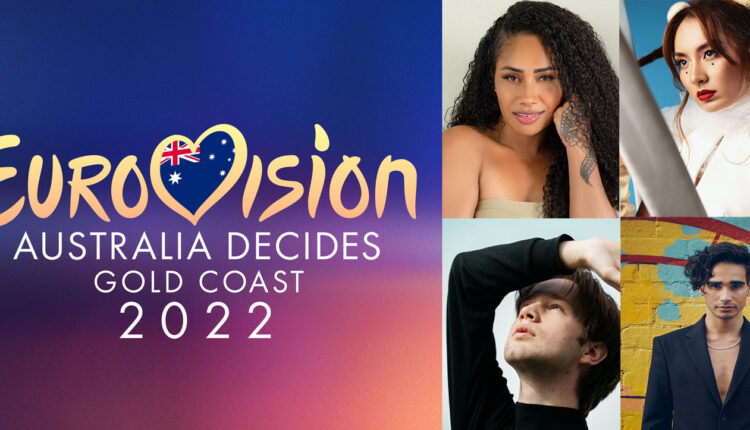 Isaiah Firebrace, who was Australia’s 2017 Eurovision Song Contest representative, will return singing a duet with a soon-to-be-revealed artist.

“I’m over the moon to be jumping onto the stage for Eurovision – Australia Decides 2022. When I first represented Australia at Eurovision in 2017, I was 17, it was my first time in Europe and I feel like everything was a blurry dream that went by so quickly – I’ve grown so much as a singer, a performer and as a person since then and I’ve definitely got unfinished business! I can’t tell you anything more except that I’m singing a duet with someone incredible and that we co-wrote the song. What I can tell you is that I cannot wait to share everything with you and that Eurovision – Australia Decides is going to be the biggest party on the Gold Coast. Until I can release the official Aus Decides duet, I’m keeping myself busy and releasing my own single “More Than Me” on November 12 – it’s going to be a very good Summer!”

Returning artist, Jaguar Jonze, who recently released her song ‘Who Died and Made You King?’ had this to say:  “I am honoured and bubbling with excitement to be performing at Eurovision – Australia Decides again in 2022! The imagination, creativity and talent of the performances is always so inspirational, it’s such a special place to express yourself as a musician and an artist. My song is going to be a moment that celebrates our resilience and the little steps that lead to big change, as well as push my creative boundaries to another level. So much has happened since we were all together, and being back with the added strength of my Eurovision family and fanbase will make it a show worth waiting for. I can’t wait to see you on the Gold Coast!”

Powerhouse vocalist and entertainer PAULINI is the final artist revealed.

“I’m super excited to be part of Eurovision – Australia Decides, after all it’s been ages since any of us have really been able to perform to anyone other than our families. That also means it’s been a little while since I’ve been able to belt out any of the big notes I’m known for. But that is something the audience can definitely expect to hear in my new single which I’ll be performing at Eurovision – Australia Decides on the Gold Coast in 2022. Eurovision to me is like the Olympics for singers! It brings together so many countries and cultures— and while it’s a competition I see it as uniting much of the world through music.”

As for what they’ll all be singing… More than 700 songs were submitted during the four-week entry period. Shortlisted songs are in the process of being matched with artists and all will be revealed soon. SBS has revealed a Toowoomba based musician, Jude York; has written an uplifting ballad to be sung by one of the artists.

“To think of my song being shared on such a monumental platform is truly mind-blowing. I wrote it with the amazing Billy Stonecipher about staying hopeful that dreams can come true. And now to have this opportunity as a queer artist in regional Queensland, I’ve never had a better reason to believe in that message! I can’t wait for everybody to hear this!” Jude York said.

Eurovision – Australia Decides was cancelled last year when SBS continued to support the 2020 winner Montaigne on the road to Rotterdam. The live event is a great platform to share accomplished and emerging songwriters and talent to the nation. And as the country reopens its borders to the world, Australia looks to a world beyond the pandemic.

“COVID has created some really dramatic song writing themes – one gothic epic, a couple of exciting power ballads but it’s a year of incredibly joyful music. Thanks so much to the songwriters and our partners, because Eurovision – Australia Decides is back and has never been in better shape.” Paul Clarke, Creative Director for Blink TV said.

Eurovision – Australia Decides will be presented at the Gold Coast Convention and Exhibition Centre on Friday 25 and Saturday 26 February, 2022. The winner will represent Australia at the Eurovision Song Contest 2022 in Turin, Italy.

My earliest Eurovision memory is Gina G representing the UK in '96, the song was a big hit in Australia, and is still played in my local gay bar! These days, I imagine I'm fluent in Italian, singing 2015's Grande Amore passionately to everyone stupid enough to watch me! Being in the audience, in that stadium for the first time, in Vienna, has naturally solidified its place as my favourite final.

Eurovision is one of those rare moments where work and pleasure harmoniously intertwine. I felt like I'm in the right place, doing exactly what I'm supposed to be doing.

Submissions for Dora 2022 are opened!