Alinur Khamzin and Khänibekuly Beknur have just won the Kazakh national final for the Junior Eurovision Song Contest 2021 and will represent the country on December 19 in Paris. The young performers will sing the song ‘Ertegi Älemi’ (World of Fairytales) at La Seine Musicale. Both have been selected as the winners after a tie following a mix of jury and public voting.

Khabar Agency has just held the final show of their national selection for Junior Eurovision. The broadcaster received a total of 819 applications for this year’s selection process, but only 30 candidates were selected for the online voting that took place last month. That voting allowed everyone to vote for their favourite performer based on cover videos. Then, the 10 most voted of the online voting went through to the final show which has been broadcast live today.

All 10 finalists were given original songs by the best composers of Kazakhstan for the final:

The winners were selected by an equal combination of votes from the public and a jury panel, made up of: 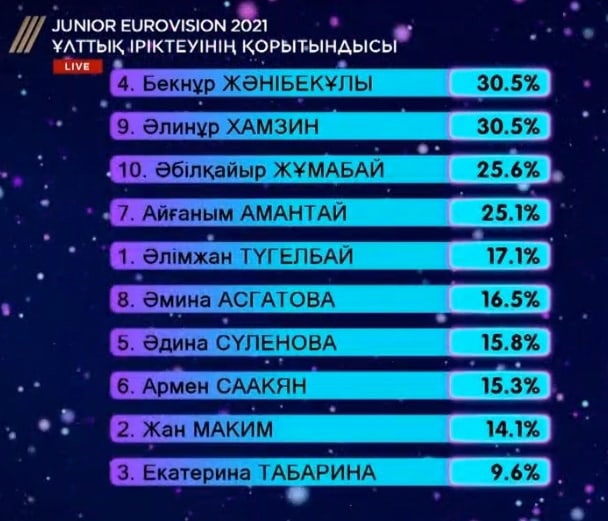 What do you think about the Kazakh choice? Let us know!

J Cruz, Tony Sánchez-Ohlsson and Zahara to be the RTVE’s advisors for Benidorm Fest!

These are the finalists of Georgia’s JESC national show ‘Ranina’