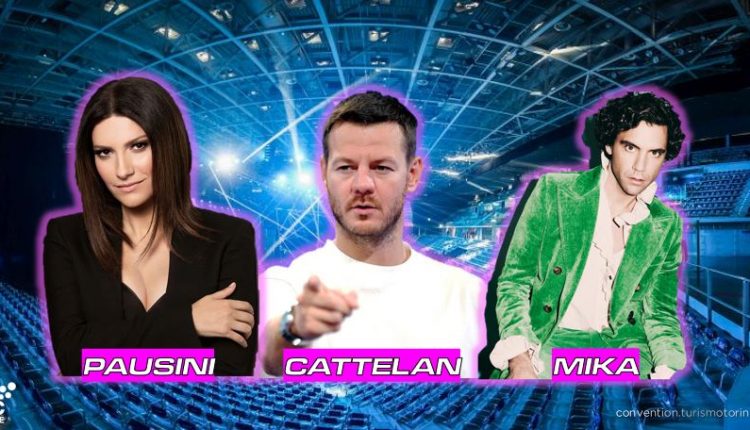 Huge news coming from Italian sources this morning. As reported by Eurofestival News and adnkronos, Alessandro Cattelan and Laura Pausini will be the hosts of the 2022 edition of the Eurovision Song Contest! However while Cattelan and Pausini have already signed their contracts, it would seem they won’t be alone on that stage in the Pala Alpitour arena in Turin this May!

Mika is also highly likely to be the Contest’s third host. This choice may seem interesting to some fans, as he has repedetely denied his involvement in Eurovision, something he has been critical of in the past. Thus, it has not been confimed that he has signed a contract yet. This trio was chosen for their artistic and multilingual skills, specifically their mastry of English.

It would seem that the official announcement was set for 2nd February, the second evening of the Sanremo Festival. Laura Pausini has already been announced as a guest for that evening. This is the latest exciting news, coming one day before the Semi Final Allocation Ceremony and just days after the official theme and artwork were released.

So who are the hosts?

Alessandro Cattelan is 41 years old and has plenty of hosting experience in music and comedy shows in Italian and English. He has also recently taken a job at RAI, so it would seem that hosting Eurovision was going to be his job to lose. He has even gone on record saying that he would be honoured to host the Contest.

Laura Pausini is a multi award-winning singer, fluent in English, Italian, and Spanish, and will turn 48 just after the Contest ends in Turin. She also has experience presenting when she hosted her own TV show. In 2018, she co-hosted the Lo Nuestro Awards Gala, a Spanish-language awards show that honours Latin music. Multi talented and multi lingual Laura is definitely up for the challenge of hosting Eurovision.

Mika is a 38 year-old Lebanese-born British singer-songwriter fluent in English, French, Italian, and Arabic. He has topped the UK singles charts and has won awards. On TV, he has served as a judge and mentor on The Voice France and Italy’s X Factor. He even starred in his own variety show in Italy called Stasera Casa Mika, which he won an award for.

Are you happy with the choice of hosts? Let us know below or on our social media!