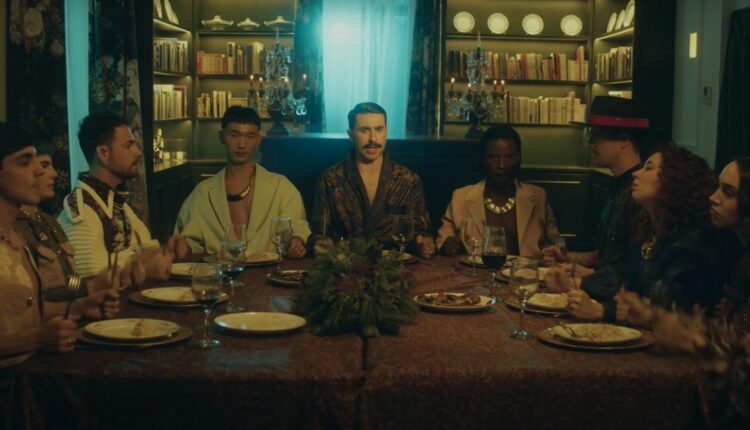 On 27th January, renowned rap champion Rayden will be competing in the second semi-final at this year’s Benidorm Fest, the new Spanish national final, with his song “Calle de la llorería”. This week, I got in contact with Rayden and asked him some questions. His answers have been translated by me.

You can listen to his song, and watch the crazy music video, here:

Most of your musical style has been influenced by rap, since your career started with the group A3Bandas, and you then went on to win the prestigious “Batalla de Gallos”. When did you first realise that you were going to become a rapper?

I’ve said it in many interviews: it’s strange that I am where I am today because I started out in music as a game with my friends. One evening in summer, we didn’t know what to do, and a group of us split from the rest, saying that we wanted to form a band. Everything that’s happened since is thanks to this harmless little proposal. Imagine if I’d said no!

In your songs, you speak to various characters in your life, including yourself, in the case of A mi yo de ayer. What thoughts and feelings are you trying to convey in people who listen to your music?

I only want to make myself understood, and to empty myself. Emptying oneself emotionally through music is possibly the best way to feel full and complete. I’m helping myself. You never know what impact you will have on the people who listen to you. In my case, sometimes people say that my lyrics put words to feelings that no-one else knows how to define or explain. I don’t know how I’ve come to achieve this but I feel very fortunate to have made people feel this way from time to time.

What inspired you to apply for Benidorm Fest? Did you apply yourself or did RTVE approach you?

It was a mixture. In July/August, there was a press conference where they announced Benidorm Fest and, when I saw they had a clear intnetion of bringing the idea of national music festivals such as Sanremo in Italy, a new window of opportunity opened up for me. I’m an avid follower of Sanremo, and without knowing, I’d been waiting for a moment just like that. I showed my interest in the festival publically but it was RTVE who contacted me. They told me that they would like me to send them a proposal but that that wouldn’t guarantee me a place with the 14 finalists. It was such a pleasure to know I’d succeeded.

Recently, RAE [official Spanish dictionary] included the word “Eurofán” for the first time, to mean “A follower of the Eurovision Song Contest and everything related to it”. Our readers would probably describe themselves that way – would you?

Whatever happens at Benidorm Fest, I think Spain has just gained a new Eurofan.

In 2013, a British TV programme declared that “rap has no place at Eurovision” because it’s “too violent” and Eurovision tends to be a “family show”. What would you say to people who believe this?

I’d say that, 9 years later, perhaps the most dangerous thing rap will do at Eurovision is cause everyone to look up what llorar means in every language.

Like the UK, Spain has suffered at Eurovision in recent years. The last time Spain won was in 1969. Why do you think recent results have been so weak, and how do you go about changing that?

I think the focus has been on being liked at Eurovision rather than showing a varied package, added to the fact that Spain rarely views staging as a key enhancing element to a song. So many times, the true, intrinsic meaning of the song has been lost. I’m sure that, looking at all the proposals for Benidorm Fest, this pattern will be changed.

Speaking of Eurovision, in your career, you have collaborated with Alfred García, who represented Spain with Amaia in Lisbon in 2018. Did he know that you applied for Benidorm Fest, and has he given you any advice?

The first person who knew was actually Ruth [Lorenzo], and then, seeing that she’d been selected for Sanremo, I talked about it with Ana [Mena]. Alfred wrote to me as soon as he found out and we’re both happy with this crazy life it’s our turn to live. Hahaha…

In addition, you’ve collaborated with such big names in Spanish music as Pablo López, Rozalén, Leiva etc. Apart from you, which established Spanish artists would you like to see represent your country at Eurovision in the future?

As well as Rozalén, I’d love to see Judeline, Valeria Castro, Guitarricadelafuente and Arde Bogotá. That would be incredible!

Now, let’s talk about Calle de la llorería, your song for Benidorm Fest, and, hopefully, Eurovision. When I’ve spoken to other artists, I’ve done so knowing immediately what their song is about, but yours is very poetic, with many words and ideas to analyse, especially for fans who don’t speak Spanish. In your own words, what, and where, is “La Calle de la Llorería”?

Calle de la llorería tells of my therapy. I’ve always been a person who’s hid his vulnerability, I saw it as something bad, like a weak spot, something to cover up with extroverted armour in order to be able to socialise. Under this assumption, and with accelerating insecurity, I let people into my life with attitudes that only fed these insecurities more and more. I became my own worst enemy and other people had to keep up as I rushed further into disrepair. In March last year (just after I released my most recent album Homónimo) I felt that I was living the best moment of my life, I saw myself as “strong”, and with a desire to attend therapy sessions. When I got to know my psychoanalyst I realised that I was absolutely not in the best moment of my life, and all I had were walls full of humidity and mould up to the ceiling, covered by furniture worthy of an interior design magazine. I started to “work on myself” and putting faith in my mental health again was what saved my life. Curiously, now that I fly the flag for my vulnerability, the people who made my life a misery want to return to it. This song is a response to them.

In addition, you’ve released the music video, which also contains symbolic imagery, like the allegorical dinner table and outfits. Whose idea was this, and what does the video add to the song?

That was thanks to omglobal. From the beginning we had a clear idea that we wanted a video similar to a film or TV show inspired by Agatha Christie’s novels, where one person is the assassin. In that case, we used the dinner table scenario to feed everyone’s insecurities by poisoning them. It seemed like a really strong concept to us.

At ESCBubble, we all know that you could have the best song in the world, but if you don’t stage it correctly, it will flop. Without giving away too much, what can we expect on-stage at Benidorm Fest and, potentially, at Eurovision? Are there any hidden surprises?

The only thing I can tell you at the moment is that it’s been a pleasure working with Javier Pageo and we think that the truth of the song will remain well-represented on-stage.

And now, a few ESCBubble fan questions so we can get to know you a bit better:

What do you like doing when you’re not making music?

Sports, playing with my son, dancing with my girlfriend and listening to other music.

Do you have a ritual or superstition that you do before going on-stage?

Having a pep talk with the rest of the band and yelling skyward.

If you won Benidorm Fest, what’s the first thing you would do?

I can’t say, there are kids reading this!

Thank you so much to Rayden for your responses! The whole of the ESCBubble team wishes you “buena suerte” at Benidorm Fest!

A connection to the past but with an outlook to the future: RAI Shows Off the Sanremo 2022 Stage

Duels of MGP 2022 Semi-final 2 have been revealed!