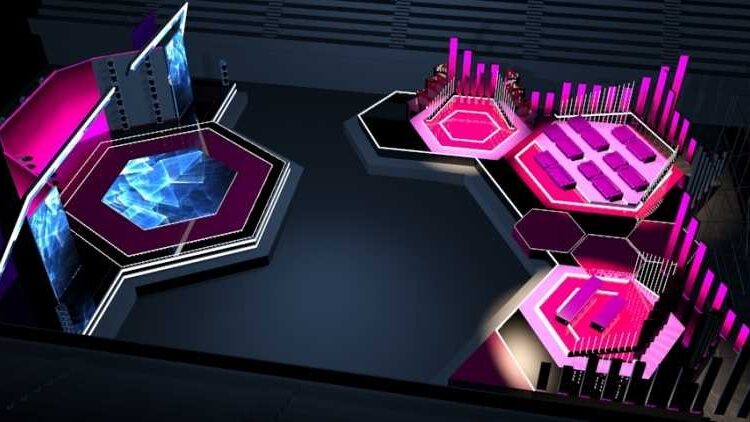 In just over a week’s time, Spain will begin its highly-anticipated new national final Benidorm Fest at the Palau d’Esports l’Illa, with the first semi-final taking place next Wednesday.

In the last hour, Spanish broadcaster RTVE released the design for the stage and green room, which have been under construction at the venue since last week.

The main stage will take a hexagonal form, recreating the logo for the show, and will measure 450 metres cubed, with a diameter of 14.22m and rotating panels on three of its sides. Two LED screens with a combined area of 20m squared will be combined with a lighting column on either side, while the floor will also boast its own 9.24m squared LED screen.

There will be another 300m squared surface opposite where the also-hexagonal green room, jury stand and presenters’ stage will be situated.

The public will be placed in the middle of these two areas, as well as on stands located at the sides, although this will depend whether or not enough of an audience will be present due to health restrictions. Over 500 fan packs have already been handed out for a combination of all three shows.

Over 200 crew members have been hired for the show, and 14 cameras will be in operation throughout the venue. The show will be produced in partnership with Boomerang TV Productions and directed by Jordi Rosell.

Last Friday, Spanish Head of Delegation Eva Mora explained the Covid protocol for the show if an artist tests positive and cannot perform. If this takes place after their first rehearsal, the recording of that will be played, but if this is not possible, either the music video or the studio version of the song accompanied by a photo montage will be played instead. “Live-on-tape” performances were not able to be made in advance due to the short amount of time available.

The order of the semi-finals was also released:

Steffen:”You can’t go through life or things in life without your better half or special someone.”