On his social media, Marvin Dietmann shared a post which hints that he could return as the one in charge of Cypriot performance for Eurovision Song Contest 2022, together with Dan Shipton. 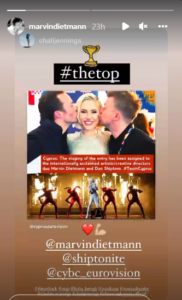 Recently Marvin was member of the jury at Benidorm Fest. Where last Saturday Chanel was crowned as the winner and will represent Spain at Eurovision 2022. At Eurovision Song Contest, Marvin Dietmann and Dan Shipton were working together on the performances of Spain, Czech Republic, Cyprus, Croatia ,Bulgaria,Estonia and Austria. Prior to that Marvin was in charge of performances of Germany in 2017 and Bulgaria in 2011 as well as most of the Austrian acts starting from 2012. Previous experience of Dan Shipton as the Creative Director includes the acts of United Kingdom from 2016 to 2018.

As we informed you a few weeks ago Cyprus was in search of the song and after the song they planned to select the performer. In addition to that there were rumours that Michalis Hatzigiannis and Alex P will be the ones behind the song but nothing has been officially confirmed. One thing’s sure their entry for Eurovision 2023 will be selected through a talent show.

At Eurovision Song Contest 2021, Cyprus was represented by Elena Tsagrinou and the song “El Diablo” who ended the contest on 16th place after receiving 94 points.

What are your expectations of Cypriot entry for Eurovision Song Contest 2022? Let us know in the comments below and at our social media links!

Citi Zēni: "We wanted to push the limits of this particular topic: how far can we go with it?"