THE SOUND OF BEAUTY is the Official Slogan of Eurovision 2022!

The Sound of Beauty, this is the official slogan of the Eurovision Song Contest 2022. Sources within the Municipality of Turin have confirmed the Contest’s slogan today. Photos of advertising installations across Turin have started appearing on social media, before the absence of an official announcement so far. Soon after, a post on eurovision.tv made it official, the artwork, slogan, and design of the Contest have now been confirmed! 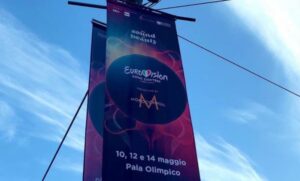 Therefore, this will be the slogan and artwork used on 10th, 12th and 14th of May for the 66th Eurovision Song Contest at the PalaAlpitour in Turin, Italy! It appears that soundwaves are moving to make a beautiful image, hence “sound of beauty.” Those sound waves will no doubt be animated for television and official uses, as Eurovision has always done in the past.

What are your initial thoughts on the new logo? Let us know below or across our social media!

Duels of MGP 2022 Semi-final 2 have been revealed!

Listen to the snippets of the Second Semi-Final of EMA 2022!