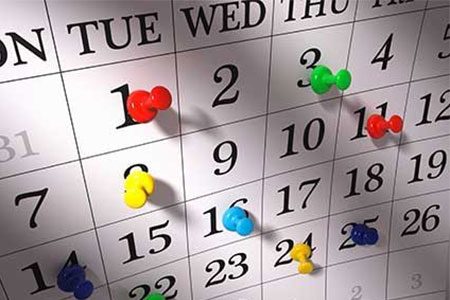 We are well into February, and yet another exciting week full of national selections is ahead of us. This week we will be getting six more winners, and five (or six) new songs which will be competing in this year’s Eurovision Song Contest. From Monday until Saturday there’s at least one show on every day and a total of 14 this week, and during the week we will also get the list of participants of the French national final.

Let’s take a look at this week’s schedule.

San Marino continues its search for their act for Eurovision 2022 with the second semi final of “Una Voce Per San Marino”. Approximately 20 acts are going to be competing in the second semi final which starts at 22:00 CET, and the jury will select three of them to qualify for the Emerging Artists’ Final, whilst another five acts are going to qualify for the “Second Chance” round. There is no televoting nor online voting in this national selection, all decisions are made by the jury.

“Una Voce Per San Marino” continues on Tuesday at 22:00 CET from the Teatro Titano, with the third semi final of international Emerging Artists. Once again, approximately 20 acts are going to compete, the the jury will once again select three acts to proceed to the Emerging Artists’ Final, and additional five acts that will go to the “Second Chance” round.

As we all know, the Malta Eurovision Song Contest is back, and its Semi Final is going to take place on Thursday, starting at 21:00 CET! A total of 22 acts are going to be competing for 16 places in the Grand Final, which will take place on Saturday. Let us know which of these 22 acts are YOUR personal favorites, by voting for them in our poll right here:

Vote for your favorites in the Maltese national selection
Total Votes: 3486
Voters: 2239
Voting is closed

Thursday evening will also bring us the “Second Chance” round in San Marino, which will once again start at 22:00 CET! All of the acts that qualified for this show will compete for the last places in the Emerging Artists’ Final, which is on the day after. The decision is once again going to be made by the juries.

Starting at 21:00 CET, Malta will have a “Special Night” of Malta Eurovision Song Contest 2022. In this show TVM will commemorate singers who represented Malta in the contest since their debut in 1971. Archived footage, as well as interviews with singers who were Malta’s Eurovision entrants are going to be shown. There is no competition part of the show, but if you like Malta in Eurovision, get ready for this “Special”, nostalgic night.

After four semi finals and a second chance round, it’s time for the Final before the Final. The “Emerging Artists’ Final” will start at 22:00, where the 16 qualifiers will compete for eight places leading to the actual Grand Final of “Una Voce Per San Marino”. The decision once again will be done entirely by the jury.

The mother of all Super Saturdays takes place this 19th of February, with seven shows, six of which are Finals! Here’s the full schedule:

The Grand Final of Melodi Grand Prix 2022 starts at 19:50 CET! Five direct finalists, four winners of the semi finals, and the winner of the “Last Chance” are all going head-to-head in the MGP final, where the winner will be chosen in not one, not two, but three rounds of voting! After all 10 acts performed, first we will find out which acts made it to the top four. These four will then face a second vote, to select the top two. And finally, in this head-to-head, the two acts will face a final televoting round, where the winner, and the successor of TIX will be selected. Let us know who YOUR favorites are in this year’s MGP by voting in our poll here:

Vote for YOUR favorites in the Grand Final of Melodi Grand Prix 2022!
Total Votes: 1764
Voters: 1260
Voting is closed

The Melodifestivalen marathon continues this Saturday at 20:00 CET, with the third heat. A total of eight acts are once again going to compete for two places that lead to the Grand Final of Melodifestivalen 2022, and two other places that lead to the “Andra Chansen”. The results will be decided entirely by the Swedish public, in two rounds of voting.

The national final with the longest names – “Tu bije serce Europy! Wybieramy hit na Eurowizję” is taking place this Saturday at 20:00 CET! A total of 10 acts are going to compete to represent Poland in Eurovision 2022, and the winner will be decided by a mix of televoting and jury votes. All 10 songs have been released, and you can let us know which ones are YOUR personal favorites by voting in our poll right here:

Vote for YOUR favorites in the Polish national final!
Total Votes: 1240
Voters: 871
Voting is closed

Only 10 minutes after the Polish final starts, at 20:10 CET it’s time for Dora 2022! 14 acts are going to hit the stage on the Croatian seaside in Opatija, hoping to be the one to represent their country this year in Turin. The winner of Dora will be decided by a mix of televoting and regional jury votes. There are going to be 10 regional juries, each consisting of three people: one HRT music employee, one member of the Croatian Composers’ Association and one member of the Croatian Music Union. The televoting will be counted proportionally to how many televotes each song has received. You can let us know who your favorites are by voting right here:

Croatia’s northern neighbor, Slovenia, starts the final of EMA 2022 only 10 minutes after Dora, at 20:20 CET! A total of 12 acts that qualified from the two semi finals will compete once again, in order to win the hearts of the juries and the public, and be the one to represent Slovenia in Turin. The voting rules here are a bit different to the rules in the semis. This time six thematical juries (OGAE Slovenia, Songwriters, Radio personalities, Television personalities, Music performers and International artists) with five jury members in each will individually vote for their favorites, and this will represent 50% of the final result. The other 50% will come from the public, but the points coming from the public will be set (72 points for the winner, 60 for the runner-up, 54 for the third most voted, and down to 6 points for the last placed act), not proportional. Let us know which are YOUR personal favorites by voting in our poll right here:

We are ending the week with the same show we started it with – “Una Voce Per San Marino”! The Grand Final of this competition will start at 21:00 CET on Saturday night, where the nine winners of the Emerging Artists’ Final from the night before will face nine Established Artists who were internally selected. The winner and San Marino’s entry for Eurovision 2022 will once again be selected by jury only.

ESCBubble will, of course, blog all of this week’s shows LIVE once again, so make sure to join us! You can watch the shows together with us on our pages, and let us know your thoughts on the performances, qualifiers, and winners in a chat together with us.

Mark Anthony Bartolo: “I have learned how we need to appreciate the small things we take for granted”