Eurovision has unveiled the stunning stage set to be built at the PalaOlimpico in Turin this May. The design is called The Sun Within – “an ambitious new stage concept based on the movements and light of a kinetic sun.” The ambitious stage will have the ability to perform theatrical motions, is framed by water, and will have a lush Italian garden lapping up the ‘sun rays’ in front of it.

Francesca Montinaro is the multimedia artist and stage designer who created the stage design. Her idea is that the stage will be able to present each of the 41 participating countries in a unique way, as they perform their songs to the 200 million viewers. Montinaro has previously created The Ripped Backdrop stage for Italy’s Sanremo Festival in 2013 and The Trampoline in the Clouds stage for Sanremo 2019. 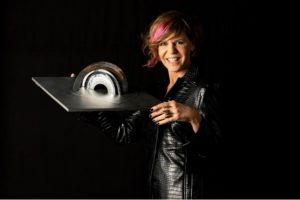 As Montinaro explains, her inspiration came partly by Italy’s unique character, the inclusive environment of Eurovision itself, and the welcoming nature of the Italian people:

“The kinetic sun, source of spectacular movements and tricks of light, rules the stage and represents our Italian attitude: always on the move, rebellious, creative, welcoming, passionate, intuitive. We are the ones with the sun within, and this is our way to be in this world … The cascade of water that frames the stage, allegorically represents the sea that surrounds us, a symbol of our complex culture. The stage is our peninsula: a country where each contestant is welcomed, no matter where they are coming from.”

Furthermore, Montinaro hints at the green room having the same look and feel as the stage:

“The artists and their teams will be hosted in a lush Italian garden, where vegetation mingles with rays of light, suspended between reality and illusion, transporting them to a playful and architectural dimension.”

We will have to wait for the Eurovision Song Contest to kick off in Turin on 10th, 12th and 14th May to see the stage in its full glory. Until then, Eurovision promises us that we “can look forward to becoming immersed in a breathtaking new visual experience, alongside the usual diverse musical soundscape that Eurovision fans have long cherished the contest for.”

Host broadcaster RAI points out that the stage is “both classic and modern at the same time, and manages to blend the digital with the analogue, demonstrating a range of light and movement”.

The stage design is very fitting with the theme and artwork released last month. Do you think of the stage design – will it be a hit or a flop? Let us know below or at our socials @escbubble.com !

Anna-Lisa: "Everybody is deserving of true happiness that can be found from within"