Today during a press conference in Paris, the artists, their songs, and the selection method for the French national final, Eurovision France – C’est vous qui décidez ! were made known. This is the second edition of this national final. After Tom Leeb was internally chosen for Eurovision 2020, France scrapped the old Destination Eurovision format for this new national final format, scheduled for 5th March.

How will it all work?

Of the 12 competing songs, 5 will be chosen from the televote. Next, a 6th song will get the “Euro-ticket”. In other words, the jury will choose a song that wasn’t in the top 5 from the televote to move to the final phase of the voting. The final decision will be a 50/50 split jury/televote of the 6 songs. 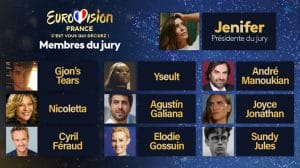 The jury will have 10 members, including:

Of the 12 competing artists hoping to fly the tricolore in Turin for France, 6 songs have been released so far, while the other 6 have not:

Who is your favourite? Who do you think should follow in Barbara Pravi’s shoes? Vote in our poll and let us know below or on our socials @escbubble !

Daria: ‘Poland deserves somebody who tries to represent them in the best possible light!’