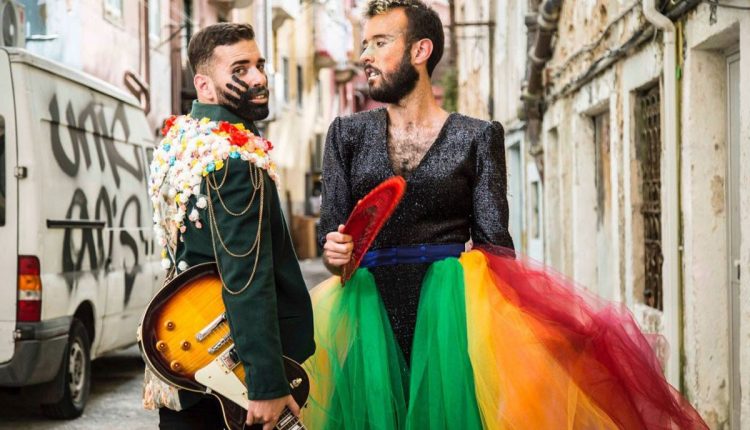 A few weeks ago, I chatted with Fado Bicha, the Portuguese fado duo with a twist, who’ve been making headlines due to their participation in Festival da Canção 2022 with their song “Povo pequenino” (“Small Nation”).

The duo will perform in the tenth and final slot in the first semi-final on 5th March 2022, with hopes of qualifying for the grand final on the 12th.

Lila, João and I had a great chat about the history of fado, being queer in Portugal and oil can guitars!

The first verses, sung over a dry beat, are poetic descriptions of my impressions of the childhood memories my father shared with me sometimes, since I was a teenager. He was born and grew up in a village in central Portugal, during the last 18 years of the fascist dictatorship in Portugal, which lasted from 1926 to 1974. His parents, my grandparents, were illiterate farmers. Here, we create a reference to the general poverty, violence and hard work (even for children) of the stories he, and others, have told me. In my personal experience, it’s kind of where we come from, our collective concept of past or even a symbolic beginning point in our collective memory.

Carnations are the symbol of the revolution of April 25, 1974, a military coup that ended the almost five-decade authoritarian regime in Portugal and the war led by Portugal in countries like Angola, Mozambique and Guinea-Bissau, which were fighting for their independence and self-determination. The enslaved people at the bottom of the sea are the countless African victims of slave trafficking by the Portuguese empire, who, throughout more than three centuries, drowned in the Atlantic while being forcibly taken by ship from west Africa to South America. Presumably, the Portuguese empire enslaved around 5 million people and nearly decimated the Indigenous communities in South America, by means of war, colonization, forced labour, diseases and evangelization. This is still a taboo in Portugal.

“How much of your salt?” is a reference to a poem by Fernando Pessoa, one of Portugal’s major poets, in a book of 1934, which glorifies the colonial grandeur of the country and is still studied in schools.

ESCBubble extends its gratitude to the whole Fado Bicha team, and best of luck in FDC 22!

Remember to show them support by voting in our poll below!

Statement from the EBU: Russia will not participate at the Eurovision Song Contest 2022!