Reports from Ukraine are confirming that later today Kalush Orchestra will sign the documents necessary for their participation in Eurovision for Ukraine. This was announced by the band’s leader Oleg Psyuk on Radio NV. Psyuk explained that after Vidbir’s winner Alina Pash was disqualified, the band’s managers received a call from Ukrainian broadcaster Suspline with a proposal to represent Ukraine at Eurovision in Turin.

Kalush Orchestra won the public vote at Vidbir, but came third with the jury. This meant they finished second overall. After a chaotic voting reveal on live television, Alina Pash beat Kalush Orchestra by just 1 point by winning the jury vote and coming second with the televote. After a scandalous few days, Pash withdrew her candidacy for Eurovision in a video posted to her social media accounts. 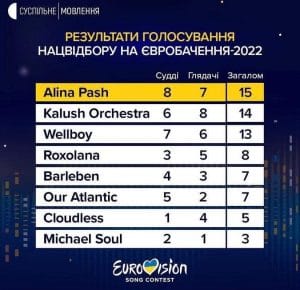 It was then reported that Suspline would be reaching out to another Vidbir competetor to replace Alina Pash, and that no new competition would be held as 20 million hryvnia (= £518,560 or €621,642) had been spent on the national final.

It later became known that the organizing committee of Vidbir 2022 had suspended Alina Pash’s Eurovision participation due to providing inaccurate information about visiting the Russian-occupied region of Crimea. Initially, Suspline stated that it had no evidence of any violation of the Vidbir rules by Alina. She had provided Suspline with a letter signed by a government official, who allegedly confirmed that Alina Pash crossed the border of Ukraine at the Chaplynka checkpoint on 11th August 2015 and returned to Ukraine two days later. However, it later emerged that it could not be verified that Alina had visited Crimea legally, so she chose to withdraw from Eurovision 2022.

Ukraine will compete in the first half of the first Semi Final on 10th May at the PalaOlimpico in Turin. Are you happy with this turn of events, let us know in the comments below or on our socials @escbubble !

Tribe Friday: We were fresh back home from a tour, which usually results in a lot of inspiration.