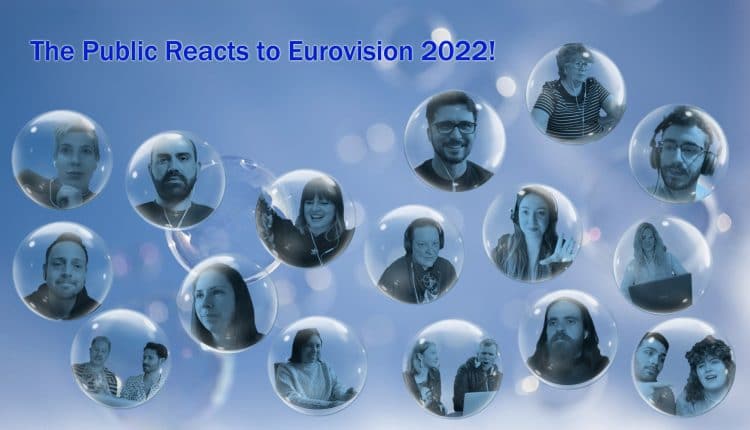 After six very successful seasons, ESCBubble’s series of “Public Reacts to Eurovision” are back! Non-Eurovision fans – casual viewers of the Eurovision Song Contest, of different ages and professions and from different parts of the world listen to all 40 competing songs for the very first time, and react to them! Once again we are going to combine the scores of the reviewers with scores of our team members, as well as You – our readers, in order to select our own winner of Eurovision 2022.

Who are our reviewers?

In this year’s season of Public Reactions we have a record of a total of 19 people of different ages and professions taking part! From students, to pensioners, musicians to teachers, from people who work in hospitality to people who work in the police – we have them all. All of them are casual viewers of Eurovision. Some of the faces will already be familiar, as they took part in our project in the previous years as well. These include:

They are joined by a total of nine ‘newcomers’ to our series:

We played all of the selected songs for Eurovision 2022 to them for the first time, and asked them for their honest first impressions for each of the songs. As always, we will present to you their comments for each song, one by one, starting tomorrow, with the Latvian song – “Eat Your Salad” by Citi Zeni.

How will we choose ESCBubble’s winner of Eurovision 2022?

Our voting system will consist of three votes – Public Reactions votes, ESCBubble team members’ vote, and our readers’ vote. Each of the votes will weigh 33% of the final result.

All of our reviewers were asked to score each of the 40 songs from 1 to 10, meaning that each song can get a minimum of 19 and a maximum of 190 points.

19 of our team members have also scored each of the songs from 1 to 10 as well, where each song can get a minimum of 16 and a maximum of 190 points once again.

The scores from our readers will be calculated to have the same weight as those from our reviewers and editors. If only maximum scores are received in our daily polls, the song will get 190 points, and lower scores will reduce this accordingly. The polls will be open as the article with the reviews is published, and will close the following day with the next article.

The top 10 songs from both semi finals will qualify for ESCBubble’s Final. In case of a tie, the votes of our reviewers will be the tie-breaker.

The ‘Big Five’ countries, and our 20 qualifiers (10 from each semi) will compete in ESCBubble’s Final. The winner of our final is going to be selected by the following three sets of votes:

Make sure to check ESCBubble.com and subscribe to our Youtube channel so you don’t miss any of our reaction videos.

Our winner last year was France’s Barbara Pravi, who received our trophy during her stay in Rotterdam:

The Public Reacts to Latvia: Citi Zeni – Eat Your Salad