Cornelia Jakobs wins Melodifestivalen and will represent Sweden at the Eurovision Song Contest 2022!

After 6 weeks, Melodifestivalen 2022 has finally come to an end and found it’s winner! Cornelia Jakobs won the competition with the song “Hold Me Closer” and will therefore represent Sweden at the Eurovision Song Contest 2022 in Turin!

As a reminder, tonight’s final featured the 12 following acts in this running order:

Cornelia finished in 1st place with the international juries and in 2nd place with the the televote and app voters, winning the competition with 146 points overall! These are the full results of the grand final: 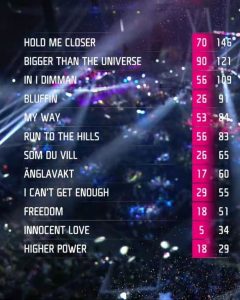 Sweden will perform in the second half of the second semi-final on May 12th and has not failed to qualify to the final since 2010. With 6 victories, they are also the country with the second highest number of winning entries, right behind Ireland with 7 victories.

Do you think Sweden will get their 7th vicotry this year? And what do you think about the outcome of Melodifestivalen? Let us know your thoughts in the comments and on our social media profiles!

Sigga, Beta and Elín will represent Iceland at Eurovision 2022!