"Worst Eurovision Ever" – The new Eurovision novel is coming out soon and is ready to pre-order!

The Eurovision Song Contest has fascinated and inspired millions of people for over 66 years and it is no secret, that this is way more than just a singing competition. Throughout the years, we’ve also received many books about the Grand Prix. About statistics, trivia or even by competing artists, writing about their experience. But now we introduce you to a different type of Eurovision book. A Eurovision novel!

The British author Roy D. Hacksaw has written the novel “Worst Eurovision Ever” and it is ready to pre-order now. We will tell you everything you need to know about it here!

What is the novel about?
Earth Island Books is giving us an idea of what is going to happen in the novel. And we can’t help but think that this sounds really exciting!

When some plucky underdogs from Moldova unexpectedly won the Eurovision Song Contest, the show’s organisers were instantly worried about how they were going to hold the following year’s competition in such a small and little-visited country. But the location was the least of their worries as a procession of unlikely artists began to be chosen for the show, and everything from Norwegian black metallers, a Saudi Arabian prince performing for San Marino, and an Icelandic bloke dressed as a dog caused a cascade of complications before a single note had even been sung. Can they keep all the egos in check, or is the whole thing going to come tumbling down around them?

Who is the author?
Roy D. Hacksaw is a British author who has published the novel “Bugger Bansky” before and he is anything but a stranger to the Eurovision Song Contest. He has been attending the event as a journalist since the 1990s and is also in charge of the Eurovision Apocalypse blog. It is worth pointing out that this novel was written by someone with a huge knowledge about the contest and contains a lot of background information and takes you behind the scenes of the event. It is a novel that true Eurovision fans will definitely enjoy!

Where can you read the book?
“Worst Eurovision Ever” is now ready to pre-order on Earth Island Books for £9.99. Early buyers will even get a free pack of Eurovision Trump cards, packed with facts and figures from Eurovision history. So it is definitely worth to get your edition as soon as possible!

Are you excited to read the Eurovision novel? Will you even be one of the lucky ones to get the Eurovision Trump Cards? Find out more about the novel and the author at Earth Island Books and secure yourself a copy! 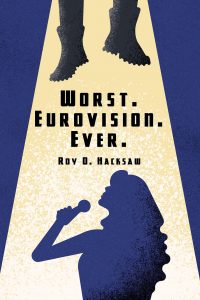 The Public Reacts to Norway: Subwoolfer – Give That Wolf A Banana