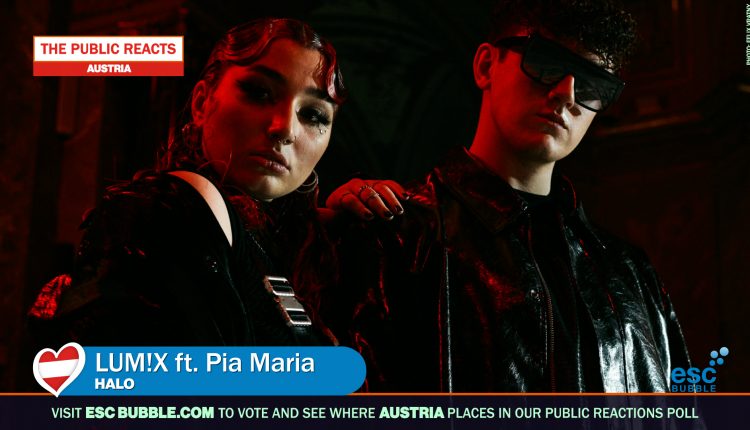 19 people of different ages, professions and background took part in this year’s “The Public Reacts to Eurovision 2022” by ESCBubble. They are all casual viewers of the Eurovision Song Contest – none of them are big fans of the Contest, and none of them have heard any of the songs before we played them all to them (except maybe the one representing their own country).

We continue this year’s series with their review and their reactions to the song that is going to represent Austria – “Halo” by Lum!x feat. Pia Maria. In addition to telling us their thoughts and impressions, we also asked them all to score the song out of 10. The comments of every single one of them may have not been added to the video, but their scores have been added of course. Check out what they had to say about the Austrian entry, and how did they score it right here:

In order to find the best song of Eurovision 2022, we also need YOUR vote:

The poll will close when tomorrow’s review of the Estonian entry “Hope” by Stefan is published, and then we will also announce the total score that Austria received.

As we mentioned, 19 of our editors have also scored each of the songs from 1 to 10. The Austrian song scored a total of 140 points from the ESCBubble team:

Our poll for Iceland is now closed, and their song “Með hækkandi sól” by Systur received a total of 115 points from our readers. Here’s the current ranking of the semi final 1 (countries in blue have qualified for ESCBubble’s Final, whilst the countries in red will not be one of our finalists):

Here’s also the current ranking of the acts from semi final 2:

28 countries to perform at Eurovision in Concert 2022!