Birmingham has become the bookies favourite to host next years Eurovision Song Contest.

OLBG bookmakers have given the odds of 6/4 for Birmingham to host the Contest  – giving the city a 40% chance of doing so.

Glasgow has moved down to second favourite in the betting odds after being the favourites to host next year. Bookmakers had given Glasgow an odds on chance of hosting Eurovision ever since the rumours started around the UK being the host.

Manchester have also drifted in the betting to 11/2 from the 3/1 they were last week.

Birmingham put in a bid to the host next year’s contest last month, choosing the Resorts Arena to host it.

The city also previously hosted the contest in 1998 at Birmingham’s Utilita Arena when Dana International won the contest with the song ‘Diva’. (You can see this below).

The city is currently hosting the 2022 Commonwealth Games so will have lots of broadcasting facilities already there, including a temporary studio that’s recently been built at the city’s Centenary Square. The broadcaster also announced last year plans to invest around £50 million into the city. 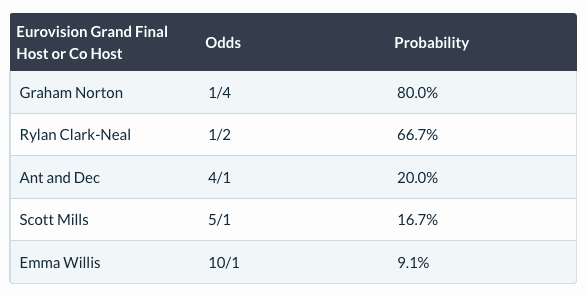 Where would you like to see next years Eurovision Song Contest hosted? Let us know in the comments section below!