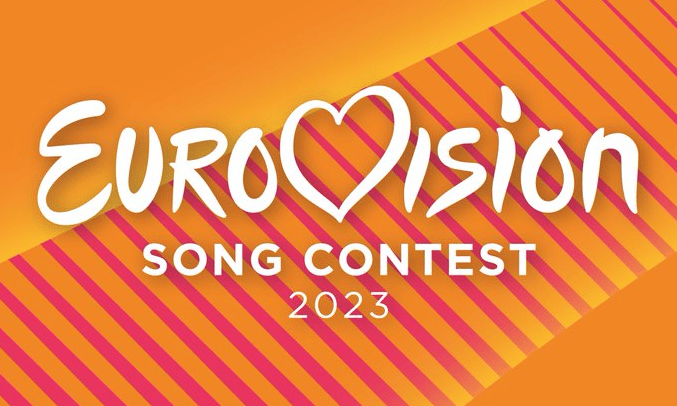 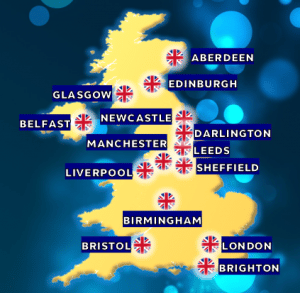 On this morning’s Radio 2 Zoe Ball Breakfast Show, with the help of Martin Österdahl (Eurovision’s Executive Supervisor) the United Kingdom’s Eurovision broadcaster BBC revealed which cities have been shortlisted to host the 67th Eurovision Song Contest on behalf of Ukraine.

After a peak of 20, as of yesterday there were 14 cities still in the running. With this morning’s announcement, there are just 7 cities left on the shortlist. No date was given to indicate when the final decision will be made, though a decision is expected by mid-September. Here are remaining cities, along with some information about each city and bid:

Birmingham is located in the heart of the West Midlands region of the United Kingdom, and is generally known for its manufacturing and engineering sectors. That said, the city has a huge music scene, and is the home of acts like Duran Duran, Black Sabbath, Dexys Midnight Runners, and Ozzy Osbourne. Birmingham also hosted the 2022 Commonwealth Games, and used the Resorts World Arena prominently. In March, Eurovision 2016 winner Jamala was a guest at Resorts World Arenam when it hosted the Concert For Ukraine. That concert raised an incredible £12.2 million [€14.4 million] for the DEC Ukraine Humanitarian Appeal! Brum, as it’s called by Brits, hosted Eurovision the last time the UK held the Contest back in 1998, something that may harm their bid for 2023. However as the UK’s second largest city, a multitude of travel connections and plenty of hotel space make Birmingham’s bid a strong one.

Glasgow is Scotland’s largest city, comprising more than one-quarter of all Scots. It hosted the Commonwealth Games in 2014 and was made a UNESCO ‘City of Music’ in 2008. In November 2021, Glasgow hosted the UN’s COP26 event, which put the city on the international stage. Glasgow is currently the bookie’s favourite to host Eurovision 2023, and with the BBC Scotland television studios just across the Millennium Bridge from the OVO Hydro Arena, it isn’t hard to see why! Host broadcasters usually prefer having a studio in the host city, having one this close to the venue could be a new record!

Leeds is found in England’s West Yorkshire region in the north of the country, and is seen as one of ‘the capitals of the north’ along with Manchester. The city is located less than 20 km from Bradford, and their combined urban population is closer to 1.5 million, meaning there is ample hotel space available. Yet the Leeds-Bradford airport lacks substantial direct flights from outside the UK, meaning most foreign fans would need to connect through a bigger hub. Leeds also houses the headquarters of Channel 4, one of the BBC’s main competitors. This could dissuade the BBC from hosting such a large international event in Leeds.

Famous home to The Beatles, Liverpool’s music scene goes back many decades, earning it the nickname ‘The Capital of Pop’. In 2008, Liverpool was the European City of Culture, helping to transform its image, which had been battered due the post-industrial decline that occurred in the latter decades of the 20th century. The city has the hotel space to host the contest, and the airport has plenty of Ryanair and easyJet flights from across Europe to transport most fans to the Contest.

Manchester is well-known for its star-studded musical heritage, with acts like The Stone Roses, Oasis, The Smiths and even Take That all calling the city home. Manchester could have a strong Eurovision bid, given its possible arena, and location. The city is well linked by air with the entirety of Britain, and is well connected by air to most major European cities. The AO Arena is the largest of its kind in Europe and can fit up to 21,000 fans for concerts. Unfortunately, it is also the busiest arena in the world, hosting more events than Madison Square Garden in New York and the O2 Arena in London. Can this venue even fit Eurovision 2023 into its schedule? Additionally, the BBC began transferring staff to the fairly new broadcast centre MediaCityUK in 2011, which is just a short distance from Manchester in neighbouring Salford. This would make broadcasting Eurovision much easier for the BBC.

Newcastle upon Tyne is the smallest city remaining vying for Eurovision 2023, but don’t count this north-eastern city out just yet! Newcastle is used to hosting music and artistic festivals and events all-year long. The Utilita Arena has shown itself worthy of hosting the best acts from around the world. This long list includes Rihanna, Beyoncé, Britney Spears, Elton John, Katy Perry, Kylie Minogue, Whitney Houston, Lady Gaga, Justin Bieber, Cher, KISS, Coldplay, Spice Girls, One Direction, All Saints, AC/DC and Iron Maiden. Might Eurovision 2023 be next? Hurting Newcastle’s bid is its somewhat isolated location in north-east England, however its airport is well connected to Europe. Also, the city does not have a BBC television studio, meaning the broadcaster would have to bring in a lot more staff and equipment, should Newcastle be selected to host the Contest next May.

Sheffield is yet another large northern UK city in Yorkshire with a strong musical heritage, and is the home of major music acts such as Joe Cocker and Def Leppard! Tourism is a growing industry in the city and bringing Eurovision to Sheffield would give the city a huge boost! The Utilita Arena is usually used for local ice hockey matches, however after a major renovation in 2013, it has become one of the most popular arenas in the UK, meeting Eurovision’s requirements for capacity and roof height. The city also has a strong link to Ukraine, being the sister city of Donetsk! The biggest downfall of this bid is its airport – of the seven cities still in the running, it has the smallest airport with the fewest flights from around Europe. Most fans would likely have to fly into nearby Manchester and commute.

What do you think of the BBC’s shortlist? Were they any cities that didn’t make the cut that should have made it? Let us know in the comments or on our social media @escbubble!