🇸🇲 Final day of the Emerging Acts Round in San Marino

Today is Day 14, the final day of the Emerging Acts Round of Una voce per San Marino, the show that SMRTV is using to choose San Marino’s 2022 Eurovision artist. The final 19 of 90 acts chosen to compete in this round will perform today for the casting judges. It has already been a long road to this point, as the Sammarinese broadcaster has now indicated that 585 applications for UvpSM were submitted, of which 299 were invited to the Emerging Artists academy in San Marino! 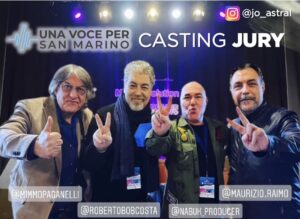 To get to the Grand Final, the 90 Emerging Artists will still need to make it through the Semi Finals on 9-13 February and the Emerging Artists Final on 16th February. Of the 90, only 9 will eventually move on to compete with with 9 “Big” or Established Artists to make a Grand Final of 18 performances on 19 February at the Teatro Nuovo in Dogana.

Fans will be able to get caught up on the Academy and Casting stages of UvpSM on Friday 14th January when SMRTV will broadcast a one hour special at 21:10 CET called “Aspettando il Festival” (Waiting for the Fesitval) that will include key aspects going back to the first day of casting on 13th December 2021.

UvpSM has already had a big impact on the tiny Republic. Secretary of State for Tourism Federico Pedini has made it known that a “record number of tourists” visited San Marino over the holiday period and into the New Year, in spite of the influence of the Covid-19 pandemic. Pedini credited the direct influence of UvpSM for bringing so many people to the country!

Do you think this format will help San Marino secure a spot in the Grand Final in Turin this May? Let us know in the comments!