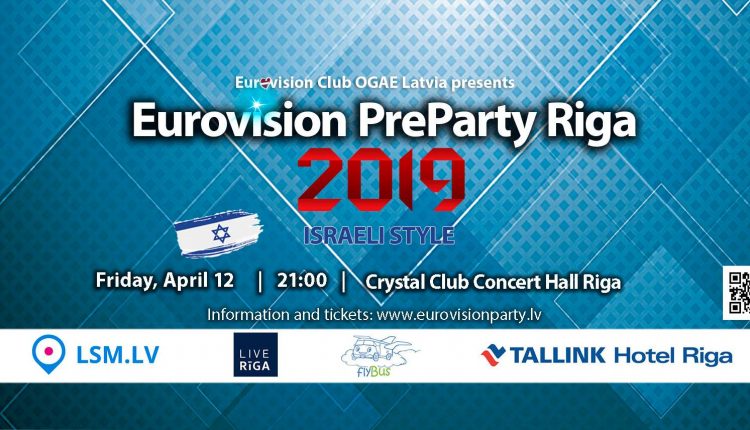 We are thrilled to be able to share the news that the Riga PreParty is back for its 6th Edition. The party has, since it’s first airing in 2014, become a regular fixture on the preview circuit in the lead up to the Eurovision Song Contest and will once again feature artists from this year’s selection and some other guest appearances. The party has a strong track record of attracting big name artists, including Conchita Wurst, Ruslana and Alexander Rybak. This year’s party will be held with an Israeli theme, and we expect more details and announcements to follow about the full line-up soon. In the meantime, here is all the information we have so far:

The party will take place on Friday 12th April at Crystal Club Concert Hall in Riga. Tickets are available now and can be purchased via www.eurovisionparty.lv

Roberto Meloni will return as host once again. He is no stranger to the Eurovision stage having twice represented Latvia. He was a member of both Bonaparti.lv (2007) and Pirates of The Sea (2008).

Roberto is a well-known television personality in Latvia and fans will no doubt be pleased to see him return in this role.

The first act to be confirmed is Latvia’s own Carousel. The pop duo consisting of Marcis Vasilevskis and Sabine Zuga won over both the public and the Supernova judges with their song ‘That Night” and will be the Latvian representatives in Tel Aviv. Since winning they have already been busy promoting their song. With a guest appearance at the Lithuanian national final, Eurovizijos Atranka, and many interviews and TV appearances.

Marcis in particular had a good night at Supernova, not only did he win the contest as part of Carousel, but he also finished in third place with his rock band Laime Pilniga, and it was his birthday!. Since then he has brought both acts together for a special combined performance of That Night in a mix of their pop and rock styles, and you can listen to it right here:

Carousel will also be joined by Edgars Kreilis who also competed in this year’s Supernova. This was his third attempt at the competition and he has become a favourite with the fans over those last three years. His song ‘Cherry Absinthe’ topped the escbubble poll ahead of the show, building on success from 2017’s ‘We Are Angels’ and 2018’s ‘Younger Days’.

With more artists to be unveiled over the coming few weeks, this is set to once again be a great chance to see the performances of 2019 artists, with an opportunity to meet and greet the performers. The party is the biggest in the Baltics and Northern Europe, and our team will be there for sure. We hope to see you there too!

This is YOUR winner of Melodifestivalen 2019!