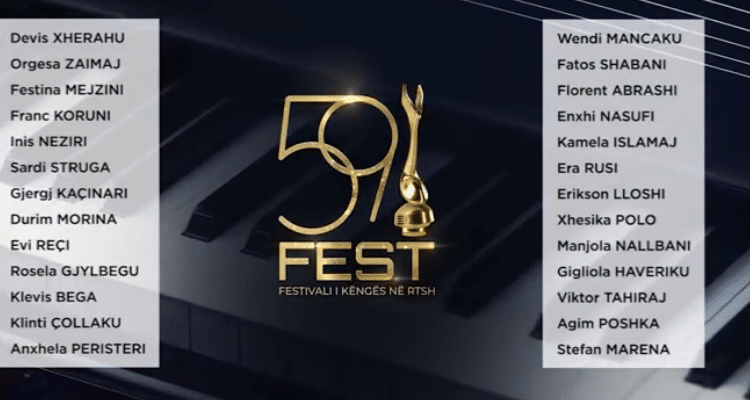 Participants at the 59th edition of Festivali i këngës revealed!

The list of participating songs in the 59th edition of the Festivali i këngës has been announced after the commission in charge for the selection of songs which consisted of Alma Bektashi, Jonida Maliqi, Agim Doçi, Klodian Qafoku, Eugent Bushpepa decided on the 26 participating songs after getting a chance to listening to all the songs RTSH received the names of the songs and performers is as follows:

Among the participating acts are a few artist which took part at earlier such as Inis Neziri, Wendi Mancaku, Era Rusi, Klinti Çollaku, Devis Xherahu, Mirud, Orgesa Zaimi and Kamela Islamaj. Last year’s New Wave winner Inis Neziri is certainly among one of the favorites. Arilena Ara will not be returning to the competition this year. The date when entries are going to be released is yet to be announced.

What are your impressions of the artists competing? Is there any song which you can’t wait to hear? Let us know in the comments below and at our Social media links!

LRT opens the submission window for their entry at Eurovision 2021!

Four countries are going to record their JESC performances at TVP?