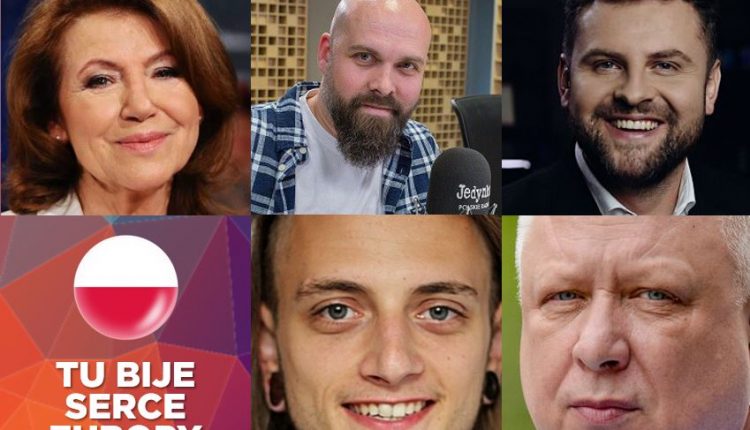 The five-member jury who will help decide the winner of the Polish selection Tu bije serce Europy (“This is where the heart of Europe beats”) on 19th February on TVP2 was announced today.

Halina Frąckowiak is a famous Polish singer and winner of many awards in Poland and abroad. Among her best-known works are Bądź gotowy dziś do drogi (“Be ready to go today”) and Papierowy księżyc (“Paper Moon”).

Marek Sierocki is a journalist and presenter, associated with TVP for years. He led, Poland’s selection show for Junion Eurovision 2021 and has commentated on Eurovision and Junior Eurovision. It has even been speculated that he may co-host the final on 19th February.

Marcin Kusy was previously on the preselection jury for Junior Eurovision 2016 and is a radio host.

Szymon Orłowski is a musician, composer, instrumentalist, and president of the LOFT ART Association for the Promotion of Culture and Art in Poland.

Krystian Kuczkowski became TVP’s program director a year ago, and he is also a director of documentaries.

The jury and viewer’s televote will have a 50/50 split in deciding the artist and song that will represent Poland in Turin. In the event of a tie, the televote will be decisive. This has happened before. Back in 2006 Ich Troje and Kasia Cerekwicka tied for 1st place, however the viewers had ranked Ich Troje’s Follow My Heart higher.

Rafał Brzozowski (Poland 2021) revealed this in an interview with PrzeAmbitnia that he will host the Final of Tu bije serce Europy. It starts at 20:00 CET on TVP!

Given that Rafał’s “The Ride” finished 14th in its Semi Final in Rotterdam, it should not be too difficult to improve on last year’s result! Do you think the new format is a step in the right direction for Poland? Let us know in the comments below or on our socials @escbubble !

Browsing Collection: ‘The song is about all the people who never believed in us and who criticised us for doing our thing!’

The final of Eesti Laul will be having an audience!