On New Year’s Eve, the voting results of 11,314 Eurovision fans were aired all day on ESC Radio. Votes came in from around the world to find the best Eurovision song at year end 2022. Just before midnight CET, we learned that despite getting some 6,000 more points than last year, Loreen had to settle for second place. Chanel‘s 35,367 points is more than double the 17,292 points that gave Loreen the victory in 2021. 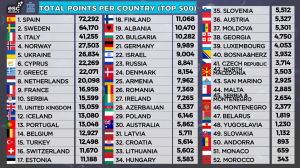 Once songfestival.be released the complete results on New Year’s Day, the full scale of the impact of the votes for Spain became known. 28 Spanish and 28 Swedish songs cracked the top 500 list, however Spain received 8,122 more overall points to secure first place. With the results extended from 251st to 500th place, we find 2 entries from Andorra, two from Monaco, and Morocco‘s only entry, meaning all 52 participating nations in Eurovision history are now represented on the list. 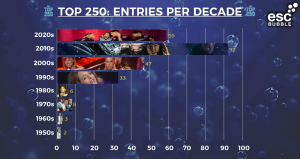 Countries on the move

The Netherlands raised eyebrows during the ESC250 broadcast. “‘t Is O.K.” by Harmony (1978) got 0 points and tied for last (1,582nd place) in 2021, and shot up to 250th this year, opening the program. That catapulted the Netherlands to take first place when we compare the ‘movement’ of all songs combined. The seven Dutch songs in the top 250 moved up an astounding 3,060 points!

On the one hand, Greece had 12 songs in the top 250 that featured last year – all moved up this year for a total jump of 1,109 spots. No other country had as many entries without at least one song losing ground. 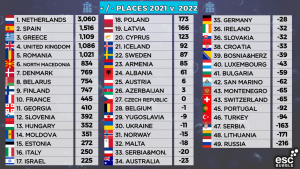 On the other hand, some countries saw their fortunes change. Sweden, for example, had 25 songs in the top 250 last year, however this time, only 17 made it that high. Sweden’s most recent winner Måns Zelmerlöw was also pushed out of the top 20, down 9 spots this year to 25th overall.

Now with the full results released, the biggest drop from last year is Moje 3’s Ljubav je svuda (🇷🇸 2013) which was 88th, and only finished in 435th place in this poll. That’s a drop of 347 places! Within the Top 250, the biggest drops came from 2021. Both Lithuania and Moldova‘s entries dropped by 137 spots each.

What did you find interesting about the ESC250 results this year? You can let us know below in the comments or on our social media @escbubble!

This is the 15 member jury panel in Belgium’s Eurosong!